3.400 European municipalities have won a WiFi4EU voucher during the latest call 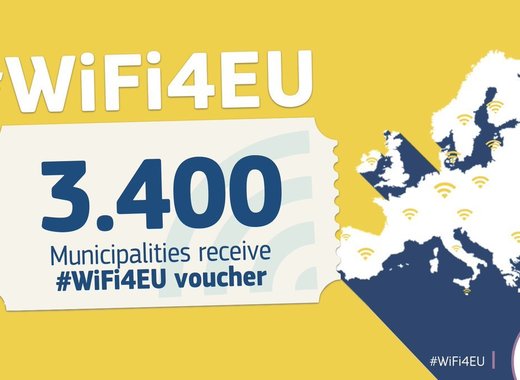 The second WiFi4EU call for applications took place on 4-5 April 2019. More than 10,000 European municipalities have applied for a WiFi4EU voucher, announced the European Commission. A list of the latest selected municipalities has already been published on the intitution's website. In the next week, winners will be receiving an individual notification of the results of the call. The next step is to sign a Grant Agreement, which is available on the WiFi4EU Portal, to receive the voucher worth 15,000 euros.

This last call has a budget of 51 million, and 3,400 municipalities will receive a voucher to set up WiFi hotspots in their public spaces. For the duration of the whole initiative, the Commission has made additional budget available on top of the initially allocated 120 million, increasing the total number of vouchers available to nearly 9,000. While based on a “first-come, first-served” principle, all participating countries were nevertheless guaranteed a minimum of 15 vouchers, provided they had sufficient numbers of applicants. For this call the maximum number of vouchers per participant State has been raised to 510. Municipalities that have been so far unsuccessful in their bids are eligible to apply again for the remaining calls, the first of which will take place later this year.