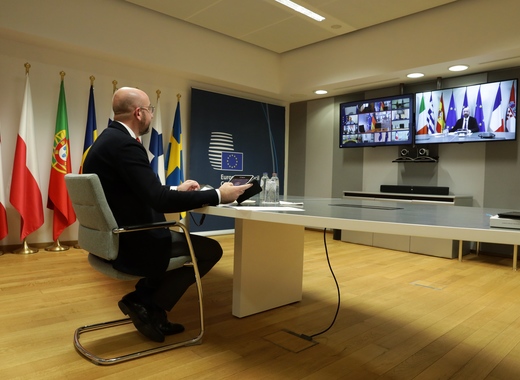 Just a couple of weeks ago EU leaders were clashing over how large of a contribution their countries should be paying to the European Union’s next 7-year budget – the Multiannual Financial Framework (MFF). The numbers they were unable to agree on ranged in the 0.001 percentiles and the whole debate was seen as one of the greatest challenges that the EU has had to navigate since the migration and financial crises of the past decade.

Now – just a few days later, priorities have shifted. But the same can’t be said about the moods behind them.

The battle for the European Union’s next 7-year budget began in earnest before the European Elections of 2019. Back then, some were hopeful that leaders would be able to iron out a deal before Parliament was swarmed with new MEPs and before the keys to the Berlaymont changed hands.

Those hopes were quickly dashed by some of the newcomers to the political stage, namely French President Emmanuel Macron who back then didn’t have any members of his own party in the European Parliament. He was joined by other upstarts who claimed that any new deal without the consent of other newcomers to the political stage would lack sufficient legitimacy and would be seen as a power grab by the old members of the EU’s institutions.

The fight resumed a few months ago when leaders quickly split into two groups – the Frugal Four, made up by the Netherlands, Austria, Sweden and Denmark, and backed by Germany and the Friends of Cohesion – a group of 16 southern and eastern countries including Spain, Portugal and Italy and backed by France.

The differences between the two blocs were insurmountable at the February Summit. Clashes over how much countries should be contributing to the bloc’s common budget failed to reach common ground with some leaders wanting the number to be as high as 1.3% of national GDP, while others as low as 0.9%.

Thus, Charles Michel, the President of the European Council, decided to give his Council colleagues a little bit more time to think and scheduled another meeting and discussion on the EU’s budget for March.

That, however, did not come to pass.

One can not rightly say that the EU was not prepared for the healthcare crisis that arrived at the shores of Italy. That is because the European Union, as an institution, has no jurisdiction over healthcare policies on the continent – such issues are entirely up to the member states and their governments. Thus, all blame tossed towards the EU institutions for their alleged failure to prevent or deal with a healthcare issue is entirely misplaced – for it wasn’t ever meant to have the capacity to do so.

Yet once we look past the institutional level of Europe and gaze upon the individual responses of member states it would be hard to deny that the lack of an initial joint approach was staggering.

Countries quickly began closing up borders, despite the World Health Organisation’s advice not to do so, they immediately started stockpiling equipment and preventing its free flow to other European markets that might have needed it more and it was only after China started importing massive amounts of protective gear did they begin to stir and consider a common approach.

Thanks to the European Commission’s efforts in nudging member states to common solutions, the EU slowly began appearing lifelike. Daily briefings, shipments of medical equipment between countries, green lanes for trucks delivering necessities, common purchasing orders and common closure of borders were just meant to be the tip of the iceberg.

The European Union’s institution, lacking the capacity to deal with healthcare issues, quickly moved on to finding new ways of securing the bloc’s economic future – a venture that it has plenty of experience with.

The European Central Bank headed by Christine Lagarde nudged from its previously uncompromising position on the limits that the bank can go to in order to help countries deal with the outbreak and the economic fallout. Meanwhile, the European Commission began diverting funds from other sectors in order to provide stimuli for struggling economies and most importantly changed its stance on government aid to businesses and government borrowing, thus allowing debt-ridden countries like Italy, Spain and France to do whatever it takes in order to keep their economies afloat, without fear of repercussions down the line.

What EU member states failed to agree on, however, was the issuing of the so-called “corona bonds” – a common instrument that was meant to finance the bloc’s response to the pandemic. What was meant to be a common gesture of solidarity and unity by all European countries instead turned to bitter division along old battle lines – reminding not only of the ones of just a month ago, dividing countries in “Frugals” and “Friends”, but also of those of 10 years ago, during the global financial crisis.

Italy, France and Spain, joined by eastern and southern member states lambasted the refusal of the Netherlands, Austria and Germany to consider new approaches to an unprecedented crisis. Spanish Prime Minister Pedro Sanchez even went as far as to claim that leaders are making the same mistakes as 10 years ago and are putting the entire European project in danger.

How and whether the European project will come out of this crisis remain to be seen – but one thing is clear - if European leaders fail, yet again, to find common solutions to their shared problems, we will be seeing far more of the radicals and the populists once the worst of the crisis is behind us.