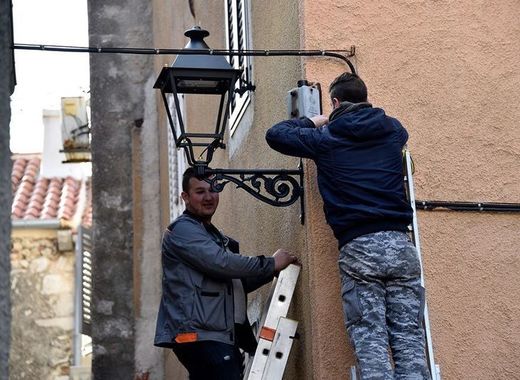 With a project worth 4,8 million kunas, the City of Cres earns a place among the leaders in energy efficiency and protection of the environment in Croatia. The biggest town on the island by the same name, Cres also serves as its administrative centre. As such, it has set a good example. More than 1 225 luminaries in the city have been replaced with new LED street lamps as a measure against light pollution.

Croatian companies from Požega and Split are carrying out the works on installing the energy-efficient street lighting. Different models of lamps are used depending on the architecture of each location.

The calculations of the two companies show that by switching to the new LED technology, the City will significantly cut its expenses for public lighting. The frugal system of streetlamps will potentially cut the costs to the staggering 85% of the current bill.

This is good news for the mayor of Cres, Kristijan Jurjako, who plans to use the savings for installing new street lamps across the next 10 years. His contentment comes after a year of works on the replacement of the old luminaries. Now that the project has come to an end, Jurjako is welcoming the tangible results, but also the less negative environmental impact that the new LED technology has.

The new LED lamps come in different styles depending on the architecture of each location. Photo by City of Cres

A measure against light pollution

The phenomenon of light pollution hides the night sky from city citizens and causes problems for astronomical observatories. More importantly, it is harmful to various ecosystems and leads to health problems. One of the actions that can show an immediate effect in reducing light pollution is to start using LED lamps with warm-coloured bulbs.

Recognizing the seriousness of the matter, the Croatian government adopted a law on protection against light pollution. It aims to safeguard people and the environment from light pollution caused by light emissions from artificial light sources. Also, it aims to give energy efficiency a boost, that is, to reduce electricity consumption for public lighting.

The law was adopted at the beginning of last year. It stipulates that local government units, or their public lighting operators, must draw up lighting plans and action plans for the construction or reconstruction of external lighting and submit them to the Ministry of Environment and Energy.

Moreover, the law determines the obligation of local authorities to harmonize the existing lighting with the new provisions within 12 years. By completely replacing the public street lighting with new LED lamps, the City of Cres has already fulfilled the requirements of the law.