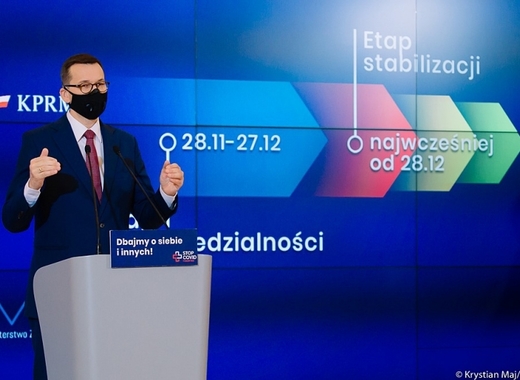 With the coronavirus situation in Poland slowly stabilizing, the country’s government, headed by Prime Minister Mateusz Morawiecki, has announced its 100-day plan of dealing with the disease. It features a comprehensive layout consisting of several stages and measures that will allow authorities to more easily adapt to changing circumstances.

The Polish government believes that by the end of these 100 days, a vaccine would already have become available which would allow them to break the chain of infections and quickly return life to normal.

The new regulations are divided into three main stages:

The first stage comes into effect as early as next week and brings along the lifting of some of the restrictions. According to authorities the situation is far too precarious at the moment to consider returning life to normal but some businesses and activities will be allowed to resume operations at a reduced and contained scale. This will affect shops and malls which will be able to welcome 1 customer per 15 m2. Other than that, the responsibility stage will not differ greatly from the current situation in the country.

During the stabilization stage, however, starting 28 December, Poland will return to the division into red, yellow and green sectors, implementing rules similar to the ones from earlier this year. Furthermore, the traditional winter holiday for children will this year take place between 4 and 17 January without the possibility for the organizing of trips.

Finally, should the situation deteriorate quickly before the roll-out of a vaccine, the government will be ready to impose another national lockdown at a moment’s notice.