Sintra is a true historical treasure, where traces can be found from the Bronze Age to the different periods of the History of Portugal, without neglecting the Roman Era and the Muslim occupation. Despite being one of the most populous urban centers in Portugal, it has refused to be elevated to the status of city.

In the context of nature, architecture and human occupation, Sintra shows a unique “cultural landscape” in the panorama of Portuguese history and a characteristic climate provided by the Serra de Sintra (“Sintra’s small mountain”).

Sintra was classified as a World Heritage Site under the category Cultural Landscape on 6 December 1995 during the 19th Session of the UNESCO World Heritage Committee held in Berlin.

Sintra is a Portuguese resort town in the district of Lisbon, integrating its northern part. The municipality of Sintra is administered by a city council composed of a president and 10 councilors. There is a Municipal Assembly, which is the municipality’s deliberative body, made up of 44 members (of which 33 are directly elected).

The municipality is limited to the north by the municipality of Mafra, to the east by Loures, Odivelas and Amadora, to the southeast by Oeiras, to the south by Cascais and to the west by the Atlantic Ocean. One of the reasons it acquires importance in the national context is because it is the second most populous municipality in Portugal, after the capital.

The municipality of Sintra is an integral part of the Lisbon region, which represents about 37% of the national GDP and concentrates a significant number of technological and research companies, inhabitants and the main centers of economic decision in the country. Currently, the municipality's business structure is dominated by the tertiary sector (84.4%), followed by secondary (14.5%) and primary (1.1%).

The main factors that supported the establishment of companies in the last two decades in the municipality were the improvement of accessibility, creating new rental alternatives for companies, the importance of the existence of young human resources, mainly thanks to migratory flows; the potential of relatively skilled labor, the availability and prices of soil and finally the proximity to the main markets.

In 2014, there were about 170 202 economically active individuals, mostly concentrated in the municipality's urban corridor. These areas are the ones that concentrate the majority of the employed and working age populations, with the remainder showing a large percentage of the retired population.

The growth in tertiary activities has played an important part in the pattern of employment in the region, with commercial, retail and support services predominating. This has been to the detriment of industry, although continuing industrial activities include the transport of materials, mineral processing, the manufacture of machinery and equipment, food-processing, as well as publishing and printing services. There has also been a dramatic growth in the civil construction industry.

Tourism is also significant, with the parks and monuments operated by the Parques de Sintra accounting for 3.2 million visitors in 2017, for example. 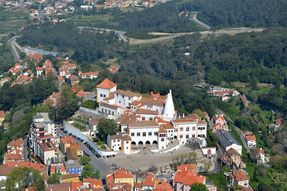 Also known as Palácio da Vila, the National Palace of Sintra was used by the Portuguese Royal Family from the XII century until the end of the monarchy in 1910, when it became a National Monument. Its architecture is quite unique, uniting the Gothic, Manueline, Moorish, Mudejar and Renaissance styles, with each wing representing a lot the monarch who lived there at the time. It is a big white palace, in the center of the village, with several wings connected by beautiful gardens and patios.

The Castelo dos Mouros in Sintra is a beautiful attraction in Portugal and was once the most important castle in the region. It is located in the city of Sintra and has sensational views from all around. It was built in the X century by the Moors as a sentinel for invasions, preventing invaders from reaching Lisbon. From up there it´s possible to see the whole region around. 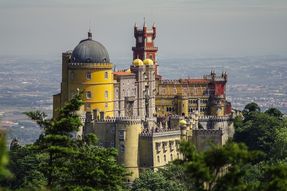 Sintra's most exotic construction, the Pena Palace stands out for its colorful architecture that looks like it comes out of fairy tales. The building was designed by the king himself, D. Fernando II, in the XIX century, as an example of romantic architecture, but with Arab, Gothic and Manueline influences. In addition to the building, there are caves, lakes and gardens. 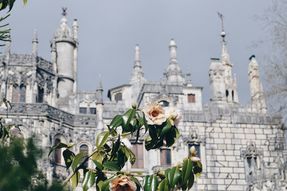 It is at Quinta da Regaleira that the famous inverted tower is located. It is a construction that descends 27 meters into the ground. Quinta da Regaleira has boulevards with Greek statues and hidden works, related to Freemasonry and the order of the Knights Templar, immense gardens and underground passages. It was originally the residence of the Monteiro family.

The Seteais Palace was built in neoclassical architecture by a Dutch consul in the XVIII century, on a piece of land provided by the Marquês de Pombal. From there, it is possible to see the sea, the Pena Palace and the Castelo dos Mouros. 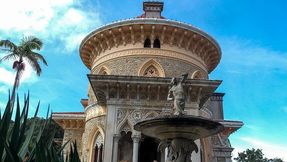 Monserrate Palace was built by an English millionaire named Francis Cook. The building takes advantage of the ruins, which have existed there since the XVI century, of a chapel and a neo-Gothic style property that had deteriorated after the 1755 earthquake. 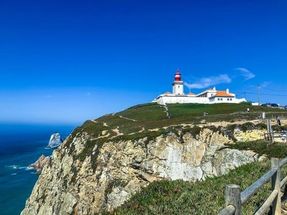 In the municipality of Sintra, Cabo da Roca is located, which is the most westerly point in Europe. Sintra owes its designation to the word of Indian origin "Suntria" which means "luminous star", in reference to its stunning landscape.