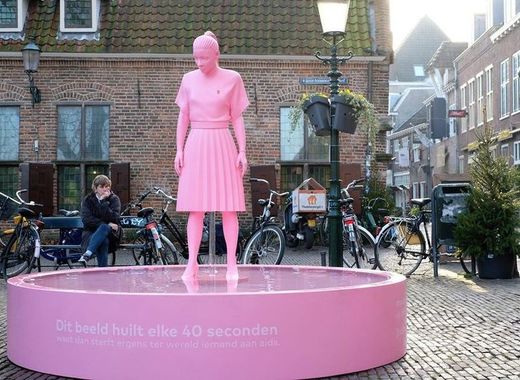 A special campaign aims to raise awareness on the fight against AIDS in several Dutch cities. Led by Aidsfonds, it uses a particularly powerful symbol: a 3D-printed real size statue of a woman who cries every 40 seconds. The goal is to bring attention to the worldwide fight against AIDS and to the fact that someone somewhere in the world dies of AIDS every 40 seconds. Furthermore, the water basin in which the woman stands represents the 32 million people who have died since the outbreak of the epidemic.

See what the statue looks like in the video below:

The statue was previously shown in Amsterdam, capital of the Netherlands. It has been there since World AIDS Day 1 December, the day on which the fight against AIDS is discussed globally. The statue is part of a national campaign by the Aidsfonds aiming to draw attention to the fact that the fight against AIDS/HIV is not over. Aids is the number 1 cause of death worldwide among young women and half of all children with HIV without treatment die before the age of two. As the organisation underlines, every year 770,000 people die from AIDS due to a lack of prevention, medicine and care.

Currently, the 3D printed figure is located in the Municipality of Amersfoort where it will remain for a week. Alderman Menno Tigelaar (responsible for Healthcare) and Amersfoort-based HIV activist Eliane Becks - Nininahazwe have unveiled the statue on Thursday 12 December. One of the stories behind the tears is that of activist Eliane Becks – Nininahazwe who comes from Amersfoort and is part of the Stop Aids campaign. She also lives with HIV and does everything to eliminate prejudices about the virus.

Learn about the fight of Aidsfonds, familiarize yourselves with the brave stories of persons like Eliane and learn how you can help them at aidsfonds.nl