Amaia del Campo: We are a welcoming, solidarity-based and diverse city that strives to get ahead 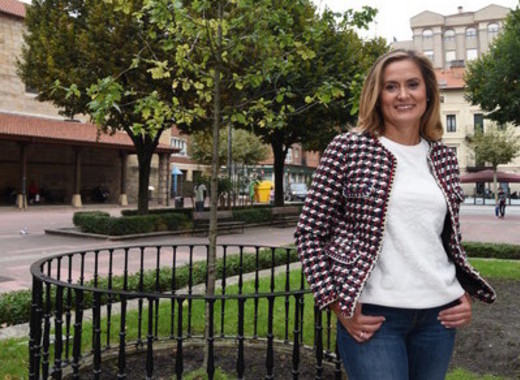 Amaia del Campo Berasategi has been Mayor of Barakaldo since 13 June 2015. In this interview she speaks about the changes she has introduced since assuming the post, the local budget, attracting young people, the Smart City strategy, climate emergency and more.

Ms del Campo, how would you describe Barakaldo for our audience?

Barakaldo is a unique city and I consider it to be the capital of Ezkerraldea or Margen Izquierda (left bank). We are the second-largest municipality of Bizkaia in terms of population (102,137) and the fourth in the Basque Country.

Our industrial past meant we were one of the most important cities during the last century and Altos Hornos de Vizcaya was a leader in the industrial sector.

We are a welcoming, solidarity-based and diverse city that strives to get ahead. The industrial crisis at the end of the last century forced us to reinvent ourselves and we are now working to restore our industrial clout thanks to a sustainable and innovative industry.

Yet Barakaldo is also a large natural territory. Over 60% of our territory is green, a natural environment that we wish to harness to take our place on the outdoor sports and alternative leisure map.

Our city has few remnants left of its medieval past but does have a rich industrial heritage that reminds us of our relationship with iron, mining and the steel industry; a lively and modern city reaching out to embrace the River Nervión estuary.

You have been mayor since 2015. What are the changes that you have introduced, and you are most proud of today?

We have made many changes in the last five years. As regards urban planning, we have driven the development of areas such as El Calero and Lutxana. We have also invested in improving the municipal services and amenities that needed to be upgraded given the lack of maintenance by other governments over the years.

And for the first time, we have had a fully municipal employment plan to continue to help our residents to enter the job market. When we came to power, the unemployment rate stood at 18% while it is now 12.5%.

We have implemented social measures such as setting up the first homeless hostel, support services for people living alone, and a fairer and more balanced distribution of social assistance… We have also expanded the cultural offerings, by fostering grants to study the Basque language and create youth leisure areas. We have equipped the first indoor children’s playgrounds and dog parks.

However, our greatest pride is clearly changing the way of running the city council, by creating a transparent local council where my government team and I are accountable to the citizens for our management.  We have opened the institution’s doors so the local residents can tell us what they need.

Furthermore, all the members of the government team have signed a Code of Ethics and Good Conduct for the first time ever. We are convinced that good management must be based on trust and information and great importance is, therefore, being given to the accountability and transparency section on the municipal website.

Other innovative actions for the citizens of Barakaldo include: the Participatory Budgets, with €1 million of the budget being earmarked for actions proposed by the citizens themselves; the Term of Office Plan, where we explain to the public which projects we have undertaken to implement during our time in power and regularly explain the progress being made or why they could not be implemented…

These initiatives had never occurred in our city before and we have noted that the citizens warmly welcome them.

The municipal budget for 2020 with an increase of 7% focuses on people, neighbourhoods and boost to the economic activity. Would you say a few words about the main projects to be implemented by the end of the year?

2020 is looking very interesting in terms of city projects. As you have pointed out, we have focused our management on three core areas: people, neighbourhoods and the economic activity. We want our residents to have a better quality of life, taking into account the people who are suffering most, our elderly…

In that regard, we have increased the Social Action budget line by 3% on the previous year, while the amount allocated to social benefits has remained unchanged, even though the number of applicants has fallen. We have also increased the grants for installing lifts or the line for subsidies so that our young people can leave home and rent.

We want to end the difference between first and second-class neighbourhoods in terms of amenities and services. We have also given huge importance to eliminating architectural barriers in the streets of Barakaldo and municipal amenities.

We are therefore considering installing new mechanical access facilities, continuing to improve playgrounds, providing the bus service to neighbourhoods further from the centre and which, currently, do not have that service…

Our projects for this term of office are very exciting.

You have outlined the problem of unemployment and young people leaving the city to pursue other economic opportunities. What do you intend to do to make them stay and make the city more attractive from economic point of view?

It is true that the talent drain was one of the effects of the crisis affecting us in the last decade. It is a consequence that we experienced in Barakaldo and was also the case throughout the Spanish State.

The business fabric was not able to absorb all the qualified human resources graduating from our universities and some of our young people decided to look for job opportunities elsewhere and even abroad. It is a problem that, to a greater or lesser extent, we experienced in Barakaldo and the other Basque cities, along with many Spanish ones.

As the economy has recovered, the forced migration of qualified young people has slowed down. In that regard, I would like to clarify that we believe that young people going abroad to build up an international CV so as to have better career options upon returning is highly positive both for the person and for the territory that benefits from that knowledge.

The young person who emigrates and who does not have an excellent opportunity to return is what concerns us. That leads to a loss of professional and human capital which is what we are working to stop.

Therefore, our Local Development Agency – Inguralde is tasked with attracting talent. The following are examples of some of the lines of work:

Last year Barakaldo presented its Smart City strategy. What main goals do you have for the near future? In which areas are intelligent solutions most needed?

Our main goal is to be really SMART, channelling efforts to get knowledge on the subject by comparing information gathered from many sources.

When designing the project, it became clear that it was becoming too large due to its mainstreaming. The work, therefore, needed to be reoriented and given the necessary material, human and time resources to turn it into reality in the best way.

A Smart City Design Masterplan was produced, after filtering and debugging a great deal of information on the subject as the first milestone.

We should stress that we have decided to prioritise the setting up of a technological infrastructure network that is necessary, sufficient and appropriate for our current needs, but with the foundations and potential for subsequent growth.

Once we have the smart city platform, we will then be able to guarantee the mainstreaming. This platform will allow all the digital transformation Smart City projects to be interconnected and will provide municipal managers with a single vision and integrated management of the information on the state of the services provided. It will therefore provide the management team with greater control of the processes and better operational and strategic decision making.

The deployment of the platform and sensors along with the rest of the technological infrastructure will go hand in hand with training and skills-building for the local council staff to ensure they can successfully work in this new smart scenario. Once the training has been given, the plan is to embark on the implementation with one of the priority vertical areas and we will probably start with the energy vertical.

Last September the city committed to fighting the climate emergency. What concrete objectives and milestones have you set in this direction?

We will also be working along the lines proposed by the Environmental and Climate Emergency Declaration by the Spanish Government in January 2020.

We do not want to and cannot waste time. Therefore, we commissioned the drafting of the Climate Change Assessment for the Municipality of Barakaldo in December 2019. Once we have that assessment, the next step will be to commission an Action Plan that will set the Climate Change Strategy in Barakaldo.

We are also working on the Local 2030 Agenda Action Plan, where we are defining a series of actions aligned with the Sustainable Development Goals (SDGs) of the UN 2030 Agenda and the Euskadi-Basque Country 2030 Agenda.

Last October Barakaldo City Council announced the first edition of the Barakaldo City Educator Awards. Would you tell us more about this initiative and why was it necessary?

The fundamental goal was and is to showcase one of the identifying characteristics of Barakaldo’s municipal management: its clear commitment to the education system and the education community, working together with stakeholders from the world of education and ensuring the city council has the resources to do so.

However, we are, above all, seeking to recognise the work of all those entities and people who have taken up the City Council’s gauntlet and have embraced our proposals with motivation and enthusiasm. Education centres, parents’ associations, private individuals, families… Barakaldo’s education approach would not be possible without them.

The City council has been putting this work into practice for years now, as it is not at all usual for a local authority, beyond their powers regarding education, to be involved in the same way as us in the development of awareness-raising and education policies.   We believe that mentoring the educators, the parents, and fundamentally our schoolchildren, must be a core area to manage the public service.

This year, we want to give greater importance to the International Day of the Educating City (30 November), as we have been an educating city for decades, by marking it with these awards, which seek to showcase everything that has placed Barakaldo at the cutting-edge of educational policies for years.

Finally, you have launched a pilot application against the sedentary lifestyle in cities. Could you say a few words about this?

Muviment is a mobile phone app, whose goal is to reduce the sedentary lifestyle of our residents, who, due to a lack of time, opportunity or motivation, are acquiring lifestyle habits that are not at all recommendable from the health point of view.

It is the result of the partnership between two local technology companies that have worked on this project. Barakaldo City Council has supported them with Bizkaia Provincial Council, the public authority that has co-funded the product development.

Furthermore, Barakaldo will also be involved as the pilot municipality where the app is going to be made available to residents who do not physically exercise but who are interested in beginning to be active.

One of the companies is specialized in technological apps for athletics and physical exercise professionals and is adapting this tool to the needs and abilities of a sedentary population. It will offer nutrition and personal training service adapted to the individual characteristics of each person.

There is great excitement about the initiative and we hope that it will prove popular with the people of Barakaldo when it is up and running.

Explore Barakaldo and subscribe to our newsletter to receive the latest from the EU cities right into your inbox.