The oldest archeological remains on the territory of Dobrich date back to the Antiquity. In the early Middle Ages there existed for a short time a fortified old Bulgarian settlement. The present city emerged in the 16th century under the name Hadjioglu Pazardzhik. Legend has it that Dobrich was founded by the rich merchant Hadjioglu. According to historical sources, the city was created by a family of the same name. It was mentioned as a small village with 14 households. Just a quarter of a century later the village was mentioned in documents as a city, and another half a century afterwards it was also the center of a large district.

Located on an important strategic road linking the center of the Ottoman Empire with the trans-Danube lands, Dobrich quickly became a lively agricultural and trade center. And in the 19th century, it became famous for its annual fair, which attracted traders from all over the empire.

On January 27, 1878, Hadjioglu Pazardzhik was liberated from Ottoman rule. In 1882, at the insistence of its citizens, it was renamed after the Bulgarian ruler Dobrotitsa, who in the fourteenth century ruled the despotism of Dobrudzha.

Ever since, the city has retained its importance as the administrative, economic and cultural center of South Dobrudzha. During the Romanian rule (1913-1916; 1919-1940) Dobrich was one of the centers of the national liberation struggle.  It is no coincidence that during the First World War, between 5 and 7 September 1916, the city was defended in bloody battles, which remained in Bulgarian history as the Dobrich Epopee.

With the signing of the Treaty of Craiova on September 7, 1940, South Dobrudzha was returned to Bulgaria. On September 25, Bulgarian troops entered the city, which is why the day was declared an official holiday of Dobrich.

Dobrich is a modern industrial-agrarian and transport center of the Dobrudzha region, one of the ten largest cities in Bulgaria - an important cultural, economic and administrative center in the NorthEastern economic region of the country. Dobrich's economic profile is determined by the food industry, which accounts for more than 50% of the volume of the urban industry, as well as the light industry. The rich agricultural area provides valuable raw materials.

The municipality of Dobrich has favorable conditions for tourism development. Leading among them are the rich cultural and historical heritage, tourist sites such as Old Dobrich open-air museum, Art Gallery, Nature and Animal Protection Centre, international festivals, fairs, proximity to seaside resorts. Dobrich has a well-developed sports base, which creates conditions for organizing national and international competitions, as well as training camps for foreign teams. 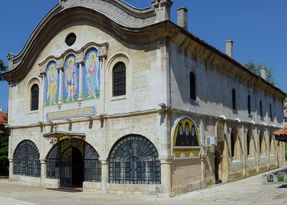 The church was opened in 1843, burnt down in the Crimean War (1853 - 1856), and then rebuilt in 1868. Located close to the Ethnographic House, the church boasts a richly ornamented iconostas. Many of the icons were painted by Kozma Blazhetov of Debar.

Holy Trinity Church is located in the central part of Dobrich. It was built in 1911 on the site of an older Christian church from the Bulgarian Revival Period. In terms of architecture, it is a classic three-nave basilica with a dome and bell tower.

The Armenian St. Hovhannes Church is located in the center of Dobrich. It was built in 1830. During the 19th century the church was burned twice during the Russo-Turkish wars. In 1894 Italian architects designed and built a new one-nave church with stone foundations and walls and wooden roof structures. The temple boasts original images of Armenian saints, painted in the 19th century. 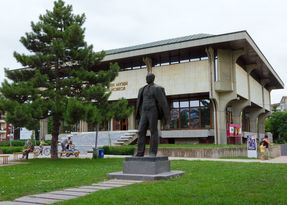 The historical museum offers tourists a walk around the historical heritage of Dobrudzha - the crossroads of civilizations, where cultures from a number of regions in Southeast Europe meet. The museum boasts some 163,000 exhibits. Only here you can see: the oldest processed gold in the world since the Stone-Copper Age; the only authentic burial site in Bulgaria from the largest prehistoric necropolis; unique collection of Proto-Bulgarian ceramics; medieval arms and equipment; valuable treasures, like gold and silver ornaments from the time of the nomads and the Second Bulgarian Kingdom. They are presented in the exhibition "Archeology of Dobrudzha", arranged in the exhibition hall of the Old Dobrich Outdoor Museum of Architecture and Ethnography.

The museum shows the architecture, customs, and crafts of Dobrich at the end of XIX and the beginning of XX AD. Its purpose is to preserve and develop the cultural and occupational traditions in the region. The visitors will find out about the production processes of traditional arts and crafts - tailoring, knitting, wood turnery, goldsmith's trade, etc. There is a bakery, a millet-ale (or boza) shop, and an old style café. Visitors can try their hand at pottery, visit the café and taste the famous byalo sladko, boza, and Bulgarian wine.

The museum is one of the most interesting houses dating back to the Bulgarian National Revival. It was built in 1860 - 61, and was restored in 1970. The house has been registered as a monument of culture and architecture. Its rooms house the exhibition Customs and Finary from Dobrudzha. The collection contains costumes and textiles which are masterpieces of arts and crafts.

They commemorate the classic of Bulgarian literature, the great writer and humanist, the master of the short story genre - Yordan Yovkov. Some of his works have been translated in 40 languages and included in anthologies of world literature.
The museum houses a remarkable piece of art - the ceramic collection The World of Yovkov's Personages by artist Stoimen Stoilov.

Museum of Modern and Contemporary History

Visit the building of the oldest casino in Dobrich, which now houses the Museum of Modern and Contemporary History. The museum keeps records of Dobrudja's history from 1878 to the present day. Here you can see the exposition "The Dobrudzha Question", which represents the fate of Dobrudzha during the Romanian rule and the peaceful return of its southern part to Bulgaria in 1940.

The art gallery of Dobrich features over 3,000 works of art - paintings, sculptures, black and white drawings, figurines and works of plastic arts by artists of various generations.
The works are exhibited in one of the stateliest buildings - a monument of architecture built in the 1930s. 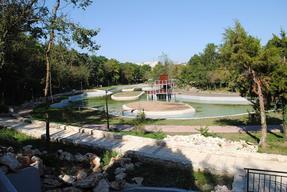 The centre is the only one of its kind not only in Bulgaria but also in Eastern Europe. Founded under a Bulgarian-Swiss project, it boasts an area of 16 hectares, 30-year-old vegetation (trees and bushes), and a convenient access.
The zoo houses over 100 animal species - deer, roe, llamas, mouflons, Przhevalski's horses, goat, pheasants, bison, exotic and water birds, etc. - which live in conditions very close to their natural habitats. A priority for the zoo is the reproduction and re-introduction of endangered animal species.

The park opened in 1867, and in 1999 it was registered as a monument of landscape design. It offers a number of sports and recreation facilities. In 2003, the 2.5-hectare garden of the old park was renovated under the Beautiful Bulgaria project - a joint project of the United Nations Organization and the Ministry of Labour and Social Policy.

The Nature of Dobrudzha Museum

The museum, located in St. George Town Park, has been in operation since 28th December 2005. Visitors can see the diorama cycles Water Caves (the last habitats of the monk seals), Wetlands (the areas next to water basins), Bustard, or Otis tarda (the most common bird species until the 1970s, which is now extinct and can only be spotted along the migration routes), the steppe (the most common biotope in Dobrudzha in the past), the longose (a type of forest with peculiar water cycle, now existing only near the mouth of the Batovska River), Agrocenosis (follows the changes in the biodiversity in Dobrudzha as a result of human activities; the adaptation of wildlife in the modern day agricultural regions), Forest (the deciduous forests and their impact on the climate and biodiversity), the Suha Reka Canyon (natural habitat for a variety of plant and animal species in an agricultural area).