Emmily Talpe: I can’t imagine that nowadays there would be no gender equality in politics

Ahead of International Women’s Rights Day, we speak with Emmily Talpe, Mayor of Ypres, Belgium 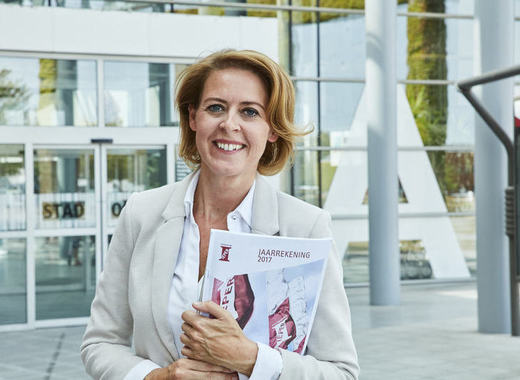 Emmily Talpe has been mayor of Ypres, Flanders (Belgium) since January 2019 and Member of the Flemish Parliament since October 2014.

Ms Talpe, would you tell us in brief about the path and challenges you faced before reaching this prestigious political position?

To start with the beginning of my career: I studied law at Ghent University. Afterwards, I worked for several years as a lawyer in a listed company. Then I founded my own business, in consultancy.

In 2006, when I was asked to take part in the municipal elections for the first time, I did not believe that politics was something that would fit me. But the campaign and elections became a success, and I really got interested in it.

In 2012 I was elected as a member of the Town Council of Ypres. In 2014 I became a member of the Flemish Parliament, and from that time politics really started to be an important part of my life. I worked hard and built up file knowledge on local and regional matters.

After the local elections in 2018, I became mayor of the city of Ypres – the first female of our town ever, a great honour! In 2019, I was re-elected in the Flemish parliament.

Do you think that being a woman has made any difference – in a positive or negative way - in your career development?

In the past, politics in Belgium was rather a men’s world. But times are changing, and luckily more and more women engage in politics. But still, I often feel that we as women have to call harder to be heard or to be taken seriously. To be a politician is a tough job, and believe me, you learn a lot, and become automatically more assertive.

Do you think that women today are involved enough in vital conversations?

But nowadays more and more women are in high positions, so gender is less of an issue in Belgium. For example, in the Flemish parliament, almost 48% of the members are women, and we all are involved in the critical conversations the same way.

How can the women’s voice contribute to resolving global challenges?

As much as the voice of the men, of course! Gender cannot be any issue in this. It should not play any role if the contribution is done by a man rather than a woman.

Female and male members of the Town Council in Ypres have equal rights, they play the same role. I can’t imagine that nowadays there would be no gender equality in politics.

In our city, 12 of the 31 members are female, and also our president is female. That’s absolutely no issue.

And how about the situation with women living in the city? Do you implement any policies in favour of protecting equal rights and guaranteeing their respect?

We strive for equal rights for everybody: male, female, gay or not, transgender… We have a commitment statement of ‘gender equality’, and that means for example that we do not want to work with stereotypes in our city communication.

When I get up, the first thing I do is going through the newspapers and checking my email. My agenda is varied. On Monday we always have a meeting in the town hall. On Tuesdays and Wednesdays, I have meetings in the Flemish parliament, where we ask the minister questions about current problems in regulation.

I am a member of the committees about Tourism, Agriculture and Foreign Policy. On Thursdays and Fridays, I always have meetings with people of Ypres, companies… In the evening, most of the times I go to a local event.

What advice would you give to young girls today who are willing to embrace the difficult career of politician?

Stand up for yourself. Politics is a tough world, and it’s not always easy to find your way. Work together to find solutions, let your voice be heard, believe in your qualities.

Explore Ypres or subscribe to our newsletter to receive the latest from the EU cities right into your inbox.