I want Jirkov to be a town where people like to stay, have fun, feel safe and proud

An interview with Darina Kováčová, Mayor of Jirkov in Czechia 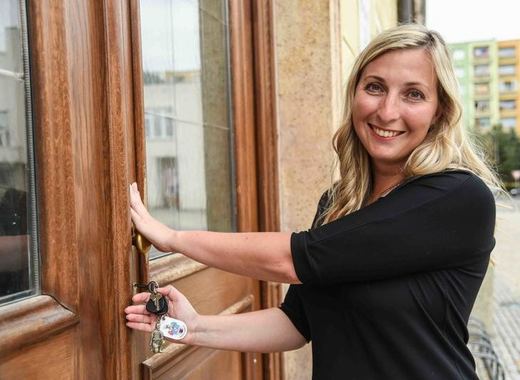 Darina Kováčová studied French Philology and History at Palacký University in Olomouc, at J. E. Purkyně University in Ústí nad Labem, she completed her pedagogical education. She became a secondary school teacher at Kadaň Grammar School where she taught French, History and Civics. In 2016 Kováčová was elected to the Ústí Regional Council, became member of the Commission for Foreign Relations and since 2018 she has been Mayor of Jirkov.

Ms Kováčová, would you describe Jirkov briefly for our audience? What is special about the town and its people and why is it worth visiting?

Jirkov is a small town situated in Ústecký region. We are pretty close to the German border. Our region is affected by history and following resettlement of German inhabitants after 1945. The region became the centre of heavy industry and coal mining. Nowadays we try to aim at mining traditions. We have interesting places which deserve to be visited, e.g. the chateau of Cerveny Hradek, towns historical underground, city tower with its old 600- year-old bell. Our town is located at the foot of Ore Mountains, it offers wonderful places to visit on bike. Our town and region have both a great number of amazing places to offer.

What are the main projects and initiatives planned to be realized in the town in the near future?

One third of our budget goes for investments. We hope the reconstruction of former synagogue will be done next year; we are going to open new green area in the town centre just above the historical underground. Many of projects were already prepared, so we need to finalize them, e.g. town info centre. Besides the investments we would like to deepen the communication between townhall and local people, in autumn we are planning to start to implement town mobile wireless which should allow inhabitants to report illegal dumping, pay compliment, follow the culture events and even it could be useful for emergency situations. We would like more people to participate in local level, for example by platform of participative budgeting.

Is there any objective in particular that you personally want to pursue as a mayor of Jirkov – to resolve an issue, to introduce an innovation, to launch a project, etc.?

If we talk about my personal view I am always in accordance with my five political keywords which are: Decency – return trust in politics, Openness – to be open to changes, to serve the citizens of Jirkov, Solidarity – be careful about others, Liberty – stay independent and free in this kind of world, Problem Solving – do not complain, bring solution. One of our biggest issues concerns profiting from poverty, it means that certain group of people exploits the governmental system of social subvention according to people in social disadvantage, and the consequence of this are new ghettos in high-rise blocks and decent people in trouble, but this complex issue is necessary to solve in accordance with governmental level and new reform will be brought about. On the other side, we try to begin with smart solutions, renovate and open new green parks, revive the life in city centre. I would like Jirkov to be, at the end of the election term, the town where people like to stay, have fun, feel safe and feel proud that Jirkov is their hometown. My main initiative is to serve people so that they like living here.

Could you tell us more about the "Ajax Notebook" project (Ajaxův zápisník) for children in primary schools?

Ajax's Diary is a prevention project aimed at raising legal awareness in early school age children; it is designed for pupils in the second and third grade of elementary schools. It is the police dog Ajax that guides children. Pupils learn to prevent from various socially pathological phenomena using Ajax's notebook. For example, they learn about bullying, alcohol and non-alcohol drugs, gambling, etc. They also learn about everyday matters like movement in road traffic, own security. The project is implemented by Municipal Police.

One of the objectives of the 4-year term of this local government concerns healthcare. Namely, you want to support and facilitate the arrival of young doctors in Jirkov. Could you tell us why this is necessary and what specific measures are previewed in this direction?

Affordable and quality health care is one of the priorities for our city. Unfortunately, we are facing a shortage of doctors and dentists. We try to offer them better various benefits. It is a nationwide problem. At the present time, we dealt with the purchase of a new X-ray machine, a key instrument and a local health centre.

You have studied and lived in Western Europe. What made you decide to return and get involved in teaching and local politics at such a young age?

Of course, I was thinking about staying abroad or in the city where I studied. Nevertheless, I was always homesick. I grew up in our city. Although my friends ran away to different parts of the country and the world, I decided to stay. I feel it as my civic duty. I have always wanted to try out teaching beautiful language French and history. A few years ago, I began to focus on politics and influence the events in the city and the region.

Sometimes I see people surprised that a young woman runs a city. I take it as a great responsibility on the one hand, and on the other as an advantage to bring a fresh wind into the political ranks.

Finally, TheMayor.EU is a portal that brings together best practices and innovations from the European municipalities. We aim to show the good work of the mayors, but also make them more liable. In what ways do you think this will be useful to your administration?

I think the portal is an excellent resource for good practical examples. I like its direction to improving communication between local, regional and European governments and citizens.