Founded by the Villanovians, presumably in the 10th century BC, the city of Florence was later inhabited by the Etruscans who were based in Fiesole, a village on a nearby hill.

Some of them had settled down below to guard the Arno river, which being navigable allowed the movement of goods with ease. The strategic position was later occupied by the Romans, who made the place their camp for the control of the river and the Via Cassia.

Up until the Middle Ages it was only a modest town without any particular importance on the Tuscan scene.

Its rise began in the 12th century

Florence was considerably enriched thanks to the trade in artefacts. It became a free municipality in 1115 and began to establish itself against the nearby cities of Pisa, Pistoia, Siena and Arezzo. The Artisan Guilds were formed by noble and rich merchants, who in that period effectively ruled the city.

Subsequently, the numerous conflicts between the most prominent families divided the city into the factions of the Guelphs and the Ghibellines, and the continuous disagreements between aristocrats and people, caused a general instability that led the Medici, a family of rich merchants and bankers, to assert themselves in the local ​​government.

Starting with Cosimo Il Vecchio, they practically exercised a regime of Lordship, extending their power over the whole of Tuscany. The family managed to have three popes and two queens of France from among its ranks.

However, they were also attentive to the needs of the population and embellished Florence with monuments, palaces and works of art. It was above all Lorenzo, Cosimo's nephew, who won the benevolence of his fellow citizens. Gifted with a charismatic personality, a lover of the arts and an artist, he surrounded himself with illustrious men and made his city a reference center for humanist culture and international politics. For these reasons, he was called Il Magnifico (The Magnificent).

The Medici, with the exception of a period at the end of the 1400s characterized by the policies of Friar Girolamo Savonarola, ruled the Grand Duchy of Tuscany until the extinction of the family in 1737. The Grand Duchy, by agreement between dynasties, then passed to the Lorraine family, who became Habsburg-Lorraine with the marriage of Francesco Stefano and Maria Theresa of Austria.

The Lorraine were also just and liberal princes. They contributed to the economic progress of the region, reclaimed the Maremma, eliminated the restrictions on the export of goods and encouraged studies.

Furthermore, with Pietro Leopoldo the Leopoldino Code was issued, which made the Grand Duchy of Tuscany the first state in the world to have formally abolished torture and the death penalty.

Except for a brief period of French domination, Tuscany remained under the dominion of the Habsburg-Lorraine until 1860, when with a plebiscite it was annexed by Vittorio Emanuele II of Savoy.

In 1865 Florence was chosen as the capital of Italy. The city remained the capital until 1871 when Rome took over.

Florence is universally considered as the birthplace of Renaissance, and is remembered for being the native city of illustrious personalities from the artistic and literary fields who with their art would influence the rest of the world.

Florence is a city and municipality located in central Italy. It is also the capital city of the Tuscany region.

The economy of Florence is based on tourism. The economy relies on the money generated from international arrivals and students studying in the city. 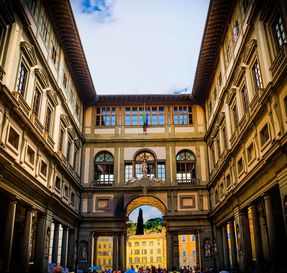 Florence attracts millions of tourists every year.  The Historic Centre of Florence was declared a World Heritage Site by UNESCO in 1982.

The city is world famous for its culture, Renaissance art, architecture, monuments and churches. Florence has to offer numerous museums and art galleries, such as the Uffizi Gallery and the Palazzo Pitti. Thanks to its artistic and architectural heritage, Florence is known as one of the most beautiful cities in the world.