Brigitte Marsigny: "As female mayors we can make cities more dynamic and humane" 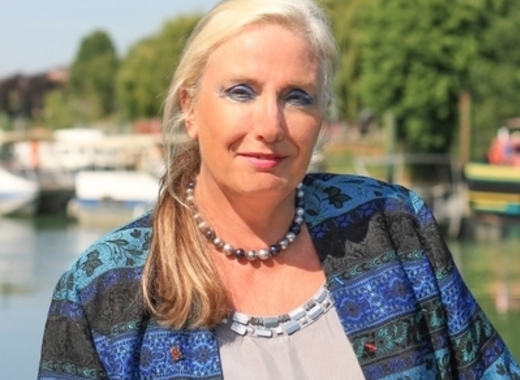 Brigitte MARSIGNY becomes Mayor of Noisy-le-Grand in September 2015. Originating from the city's civil society, she has worked for nearly 40 years as a lawyer. She has contributed to the development of the judicial reform and is deeply devoted to the protection of the most disadvanteged. Mother of three children and also a grandmother, she is passionate about travel, horses and horse riding.

Madame Marsigny, how would you describe the city of Noisy-le-Grand?

A pretty town east of Paris, with almost 70,000 inhabitants and exceptional environment. The department is not often put forward, but we have everything: the Marne, the forest, transport, we are 15 minutes from Paris and we have two lines of RER. Then, the seat of Greater Paris Greater East plays an important role within the metropolis of Greater Paris. So, it's the capital of eastern Paris.

During your inauguration, you shared the following objectives: to stop the concreting and protect the heritage, revitalize the local business, strengthen the municipal police, develop video surveillance and conduct a financial audit by an independent firm. Have you succeeded?

Well, from the beginning we said we wanted to stop the concreting. And despite what our opposition is saying, we actually did it. Because we have revised the Local Urban Plan, we have reduced the height of the apartment buildings and the collective living areas, we have established that we call “courtesy areas”. That is to say that right in front of the pavilions there cannot be tall buildings but gardens.

In addition, we have developed natural areas and more specifically we are going to buy, together with the Region, the Saint Martin Woods which is 300 hectares of natural spaces to the south of the city. We should realize this operation before the end of the year. The Region buys the wood to make it available to the inhabitants of Ile-de-France and the city buys the properties that are inside to make exhibitions, a museum, activities. In reality, we have really reduced the collective zones of living.

Besides, it takes several years to set up real estate operations, at least 3-4. In particular, there were a number of programs that were launched before our arrival. My predecessor had ambitious plans to build very tall ten-storey buildings, while we made it to six storeys; we have reduced the number of dwellings and the number of inhabitants in these areas.

Yet, we have a real divergence with my predecessor on the development of the edge of the Marne for which I have received funding from the Region. We will be creating an eco-district with wooden houses, with small retailers and a natural park of 5,6 hectares where my precessessor previewed a marina costing 10 million euros and high-rise buildings.

And above all, we have removed except for rare exceptions, the pre-emptions. My predecessor, as soon as he wanted to acquire a parcel in the city, he would pre-empt it, buy instead of the people who wanted to buy. The city replaced the buyers.I removed all that. It should be noted that there were 97 pre-emptions between 2011 and 2015 and only 7 since 2015.

And regarding heritage protection, there is one thing I really care about, a very iconic place, which has been included in several films (among them Hunger Games), that are called the Abraxas Spaces, at the entrance of the city, Palacio, the Arch and the Theatre. My predecessor wanted to destroy some of the constructions that were made by Ricardo Bofill 30 years ago now. It is neo-classical architecture that is part of the heritage of the city and it's magnificent. Unlike my predecessor, we would like to make the neighbourhood more dynamic and rehabilitate it. We are currently making small buildings in the same construction style, with shops, paths, pedestrian ways, to enhance their value. I got an agreement and the help of Ricardo Bofill, the Franco-Spanish architect, and we met several times. He is a genuine supporter and driver of this evolution.

Afterwards, we have the Fort de Villiers, in the town of Noisy, a historic site that was built at the end of the 19th century, it was opened for the Heritage Days in 2017 and 2018. We have participated in the call for projects "Reinvent the metropolis of Greater Paris" Under this framework we have received an offer for the purchase of the Fort, but I did not want to sell it. They wanted to make it a closed hotel inaccessible to residents of the City, completely against my ambition of this historical site. Here is why we did not agree.

There is also the renovation and rehabilitation of part of the existing real estate. We invested 45 million euros over a dozen operations to rehabilitate the different neighbourhoods (Butte Verte, Yvris, Pavé Neuf, Hauts Bâtons, Cormiers, Champy et Centre-Ville). The schools, public buildings, cultural spaces have seen important works and we are happy we did it. It is an investment in the heritage of the city. Also, the chapel of Sans-Logis, which is under renovation with funding from the City, the Region and State.

Then, it should be noted that Noisy-le-Grand is the third business pole of Ile-de-France, with 4000 companies, 500 000 m2 of offices. Since 2015, when we arrived, we have been trying to encourage, accompany and support the economic actors. Regarding the parking issue, we introduced the blue zones. To prevent people from parking in the same streets to catch the RER, we tried to find other solutions, to participate in the renovation of parking and the commercial centre, for the convenience of everyone...

Another meausure previewed by the Law, that we have introduced in Noisy - the possibility to preempt commercial funds. That is to say that when there is a business for sale, the city has the right to look at this sale and to prevent it. And we do it in order to protect local commerce.

Then we restarted the Richardets activity zone with companies. We have revitalized it and avoided setting housing there, as initially previewed before my arrival. Thus, since 2016 a hundred companies have moved in. It has increased the office turnover by 15%, which is not without significance.

And regarding the municipal police. When we arrived, there were nine municipal police officers. We reinforced this to compensate for the lack of staff of the national police. I hired an additional 30 municipal police officers . We armed the municipal police, we have created new teams with horses, motorcycles, dogs, and increased the number of vehicles ... We don't spare our efforts in terms of video surveillance: today we have 110 cameras installed in the city with better coverage of the territory. I remind that at every time one installs a camera, it requires the permission of the Prefecture and it also represents an investment of 2.5 million euros. And we put cameras everywhere to protect the citizens.

Finally, we have realized a financial audit in 2016. We managed to reduce the debt of the city significantly in 4 years - at December 31, 2018 we were at 99 million, or 50 million less in the space of four years. It is bad in terms of debt reduction. Ever since we arrived, we did not increase the communal part of the local taxes.

And what remains to be done still, what project for the city could you not realize during the five years in office?

The opening of Saint Martin wood, which we hope to be able to do with the Region by the end of the year or at the beginning of next year.

We are also working hard on Noisy Hotel Residence, which has been transformed into housing for people in extremely precarious situations, financed by SAMU Social ... Our goal is to move these people into the City, to put them in a different situation, in social hotels. We are considering the setting up of social housing… We work on the esplanade of the Commune of Paris, we are trying to redevelop and transform that area, to put shops on the borders of the lake.

Finally, on Grand Paris Express. I have an issue, because if the Departments of Seine et Marne and Seine-Saint-Denis do not want to change the disposition of the two lanes to the south and to the nord of the future Noisy-Champs Station we cannot do anything, and we will have a magnificent station in the middle of nowhere. It is absolutely necessary that we be helped on this operation. And if we want to develop the new station, we must be able to advance on these matters and move traders, develop the area of Champy.

Could you say a few words about the transformation of the family hotel in Noisy? It was inaugurated a few weeks ago and now houses people in need of sustainable housing and reintegration?

The first building permit application dates from 2010. There have been three requests and my predecessor did not want it. I gave the permit and the loan garancy needed for the rehabilitation. I was able to obtain grants from the Regional Council in which I sit with President Valérie PECRESSE. It is now truly a residential and social reintegration centre that welcomes women from the street and their children with social workers on site ... I'm very proud, we've preserved a historic building. We have 19 apartments, fully furnished, that accommodate 50 people - it yet again reaffirms the solidary dimension of the City of Noisy-le-Grand.

Would you tell more about the project of the innovative eco-district "The Isle of Marne"?

The only thing I want to add is that we are making a very innovative neighbourhood with small wooden houses. We will be creating a nursery with an additional 60 beds. We will have passive housing, 80% with an energy balance higher than the current standard, we will create facilities for carpooling, equipment for bicycles and we are considering transport means to the site itself. Then there is the park, and as at times the Marne spills out of its bed, this area will allow us to have an area of retention in case of flooding.

I set up a lot of consultations with elected officials and the teams of the City. My door has always been open and will remain open. We try to interact with people as much as possible. We have set up an Internet platform - Noisy App - where people can react immediately and have answers to the questions they ask.

Of course, there is still plenty to do, as in all major cities, with completely different neighbourhoods. We must make it so that people can live together, which is not always simple. And this is more or less the objective we have, to continue to be attentive to people and consult them.

I think it's important to know that there are about 19% of mayors who are women in cities in France. I believe that we can make a city more dynamic, we can do better as female mayors. Yet, this does not prevent us from having authority, rather it allows us to have a more humane vision, to be attentive to women, to listen to children, to bring solutions for the problems of young people. It's something that I really care about.

Finally, it was a really short term: in 4 years we did what could not be done in 20. What is encouraging is when people of the city say they are satisfied with what you do. Honestly, we have done a good job and I think we will be able to continue doing it. We are aiming at that.