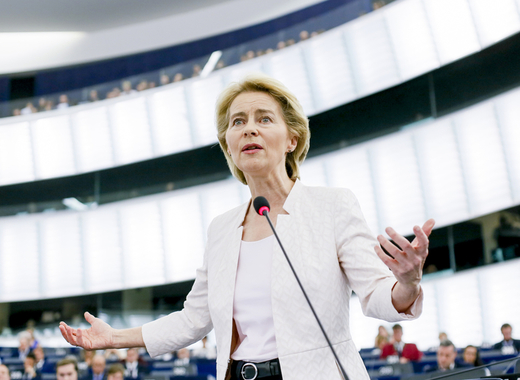 Mentions of “her” name to replace incumbent president of the European Commission Jean Claude Juncker started seeping in the final hours of the European Council meeting. At first, it made no sense, it was a peculiar choice for a candidate, to say the least. But as it was becoming more and more obvious that Ursula von der Leyen would be the heads of states’ pick for European Commission President, the more it started to make sense. She was the perfect Franco-German compromise candidate. One that in an ideal world, under different circumstances and with enough moulding could be likeable by all progressive forces. Of course, it didn’t go as well as some might have hoped.

So, who is Ursula von der Leyen? A teen singing star? A member of Angela Merkel’s governments since the very start? A failed defence minister? One of the least popular politicians in Germany and in her own party? The answer is, all of the above. (Don’t believe us on the first one? Check it out for yourselves). The position of minister of defence in Germany is considered the “ejector seat” for politicians who are no longer useful. The ministry’s unpopularity is deeply rooted in historical, political and societal reasons, built up over the years. Without getting into specifics, the fact is that whoever becomes minister of defence can’t succeed – they will always be despised and ridiculed by the public no matter what they do. Of course, it also didn’t help that Ursula von der Leyen was mired in corruption scandals and was disliked by her own party for her overly liberal views on topics like gender equality and gay marriage.

The European Parliament was also livid at her nomination – not because of all those things we just listed, but because she wasn’t one of the Spitzenkandidaten – the lead candidates of the European Parties. It’s becoming rather apparent how easy it became for the public to gang up on von der Leyen’s nomination – with medias riding every negative story about her, with MEPs ready to exploit every weakness in a deepening inter-constitutional conflict with the European Council. It was obvious from the get-go that voting her into the office of President would be a tumultuous task.

On the day of the vote, Ursula von der Leyen made an impassionate speech, drafted in order to impress members of Renew Europe and the Socialists and Democrats who were on the fence, as well as to bring the Greens into the fold. After last week’s cross-examination carried out by these same parties, she desperately needed a win – a way to convince them she actually had a semblance of an idea of what she intends to do during her mandate.

And she somewhat did it? Following the debate on her candidacy, she managed to secure a majority of 9 votes – the slimmest majority since the adoption of the Lisbon Treaty. It is important to note that she managed to get over the line despite massive boycotts from pro-EU progressives and thanks to Eurosceptics - like the 5-star movement or Fidesz or Law and Justice, or whoever else. But that fact must not take centre stage and we must not believe that her Commission will be held hostage by these same forces. Ursula von der Leyen was boycotted by members of parliament not because of their disagreements with her or doubts about her credentials, but rather because of their distaste for the way the Sptizenkandidat system was dismantled. In their pursuit for the perfect world in which the so-called Osaka compromise could still work out or where the Spitzenkandidat system was still alive, some members of the Greens, the Left and the Socialists and Democrats were ready to sabotage one of the most overly pro-EU and federalist politicians to ever hold the position of president of the Commission.

Where there are winners, there must also always be losers. And paradoxically, the biggest losers of the whole ordeal are mainly Germans. The German Social Democrats, the SPD managed to do everything wrong during these last two weeks. First, they boycotted the candidacy of a minister who is part of their own government, because of their support for Frans Timmermans, thus they forced Angela Merkel to abstain during the final vote in the European Council meeting. Then they attempted to lead the Socialists and Democrats in the European Parliament in a rebellion against the candidacy of Ursula von der Leyen but again managed to underestimate their irrelevancy following the last European elections. And finally, they made a 180 turn and in the hours before the final vote started talking about maybe making a compromise and voting in favour of von der Leyen. That didn’t work out either.

Another German who is in way too deep now is Annegret Kramp-Karrenbauer (AKK), the person who is supposed to succeed Angela Merkel. Remember how we earlier mentioned that the ministry of defence if the “ejector seat” in German politics? Well, that’s where AKK is headed. Her ratings had been suffering for months and after a few terribly received jokes and a fight with a 20-something-year-old YouTuber it slowly became apparent she might not be the ideal person to follow in Angela Merkel’s footsteps.

Moving a bit to the East, we come to Poland and Hungary, who style themselves as the big winners of Ursula von der Leyen’s win. But are they really? At most they can say that they managed to murder the candidacies of Manfred Weber and Frans Timmermans, thus placing Ursula von der Leyen as a frontrunner. But she is pretty much the exact polar opposite of Viktor Orban and Kaczyński – a federalist at heart, stark defender of gender and LGBT rights and critic of regimes, violating the rule of law. What exactly are they celebrating?

A glimpse of the future

It has become painfully obvious that what’s been happening for the past couple of months can never happen again. The process by which Ursula von der Leyen took over the Commission presidency was destructive and unappealing to onlookers. To combat that she has stated that she will seek to re-establish the Spitzenkandidat system and make it more democratic and transparent. And how does one do that? Through the establishment of transnational lists for the European elections – a cornerstone of French President Emmanuel Macron’s vision for the future of the European Union. That could require much-dreaded treaty changes, which would require unanimity and national approval and would open up a whole new can of worms, but hey – the future demands us to be bold.

She has also further reiterated her support for abandoning of the unanimity rule in the Council when it comes to votes concerning the European Union’s foreign policy, as well as taxation issues. A potential transition to qualified-majority voting on those two subjects would be an unprecedented upheaval.  She has also been adamant that the creation of a mechanism through which the European Parliament can initiative legislation on its own is vital for the democracy of the European Union, as the MEPs are the only representatives, directly elected by the European people.

It’s apparent where all of this is going, right? As we mentioned not only at the start of this article but also in our previous one, Ursula von der Leyen is one of the most federalist-minded politicians that have ever headed the European Commission. Her stances on the issues laid out above are a perfect illustration of her belief in the creation of a united federal European state – a la United States of Europe. Which makes the support of nationalists for her candidacy even more absurd and baffling.

Of course, all of these things are merely promises. And every single issue Ursula von der Leyen sets out solve will be hard to achieve with such a slim majority. But change is inevitable. The issues plaguing the European Union’s democratic credentials have been building up for too many years and have just recently culminated. The fallout from this near-constant crisis will resonate throughout the halls of European capitals for the next five years as leaders try to figure out how to not only preserve the European Union but also maybe improve it.