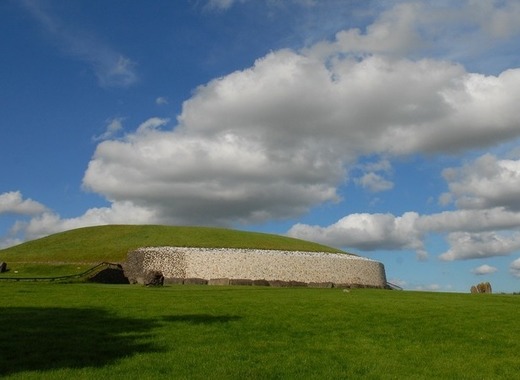 Many are the tourists and travellers that dream of visiting Ireland – be it because of its beer tradition or its friendly people. But there is much more to the island country than this, of course. The cultural heritage of Ireland is immense and only a fraction of it is presented in the following lines. Learn more about three of the most frequented sacred places.

Located in Louth County, this Neolithic mound in Newgrange dates to 3,000 BC. It has been used as a burial complex and observatory. With a width of 75 meters and a height of 12 meters, the stone building is considered one of the most important prehistoric sanctuaries in the world. A small entrance to the base of the mound leads to a 20-meter corridor at the end of which is the cross-burial chamber.

In its corners there are human remains after cremation. The walls are richly decorated with geometric shapes and spirals. A curious phenomenon occurs during the winter solstice - just at sunrise, the funeral chamber’s floor is illuminated. However, nowadays only visitors who have won a special lottery can enjoy this phenomenon.

Located in Meath County, not far from Newgrange, this tomb is the largest of a burial complex from the early Bronze age. Even today the purpose of the sanctuary is not clear, but its origin is believed to go as far back as  the year 3,000 BC. The sanctuary consists of a large mound of about one hectare surrounded by 18 smaller decorated burial stone mounds. The main mound can even be dated to 5,000 years BC. Surrounded with 100 curved stones, it consists of two chambers that almost meet in the middle. The corridors leading to them point eastward and westward. However, there are no buried people in the richly decorated spaces instead the dust of the cremated outside the tomb is laid.

The generations who lived after the construction of the tomb used the large mound as a fortification facility, making deep trenches around it. Although in the first century it was the home and political centre of the Brega dynasty, the complex was abandoned in the Middle Ages.

Knowth and the other megalithic sites of the Boyne Valley were designated a World Heritage Site by UNESCO in 1993. For more information on how to access them, visit Knowth.com.

Located in Sligo County, this burial necropolis consists of several corridor tombs located along the ridge of the Bricklieve mountain range. To date, there are 14 very well-preserved mounds, under which there are also 14 tombs. They date from around 5,000 years before Christ and have been used until the middle of the second millenium BC. The largest tomb has a size of 30 meters, and the smallest one is 8. The chamber is covered with a large limestone slab on which stones are poured. Inside, there are remains of buried and primitive cannons made of antlers.

Although the religious significance of the tombs is not clear, they certainly have an astronomical one. Here again, through the openings at the base, the camera illuminates during the summer sunshine - by the sun and during the winter solstice - by the moon.