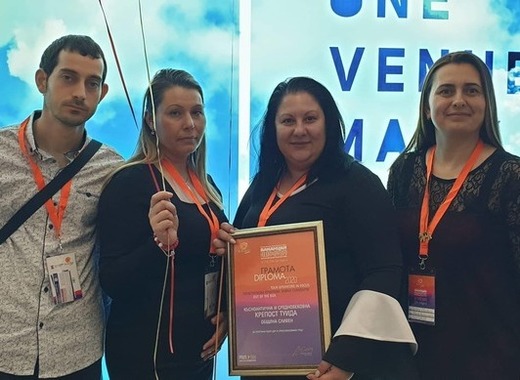 The antique and medieval fortress Tuida won in the Out of the Standard category at the annual awards presented by the Holiday and SPA Expo-2020 in Sofia (February 13-15), Sliven Municipality announced. An expert jury honored the Sliven site for its "One Day in the Medieval City" programme, which has been offered at the  Fortress since 2019.

This award is awarded for a unique tourist program or destination, which is not offered by another tour operator or agency and / or includes non-standard routes, sites, attractions, way of travel.

This recognition comes on the heels of the "2019 Municipality for Cultural and Historical Tourism" award for Sliven Municipality. It was received last December as part of the Ministry of Tourism's annual awards, traditionally determined by online voting.

The wings of the season see a sustained tourism growth

For the first time, 40 new exhibitors and industry representatives from Bosnia and Herzegovina, Kenya and France participated in the forum organized under the auspices of the Bulgarian Ministry of Tourism.

Opening the expo, Minister of Tourism Nikolina Angelkova noted that despite the bankruptcy of Thomas Cook and the fierce international competition, in 2019 Bulgaria achieved an increase of 0.4% in foreign tourist visits, which exceeded 9.3 million.

She added that a 7 to 15 percent increase of vacations  in the wings of the season (April - May and September - October) has been registered. According to Minister Angelkova, this is due to the priority promotion of cultural, historical, balneo and SPA and wine and culinary tourism with developed thematic destinations. Religious tourism destinations are to be added to the mix soon, announced Angelkova.