105 million euro invested in preservation and restoration of Pompeii

The project aims to boost tourism at world-renowned archaeological site 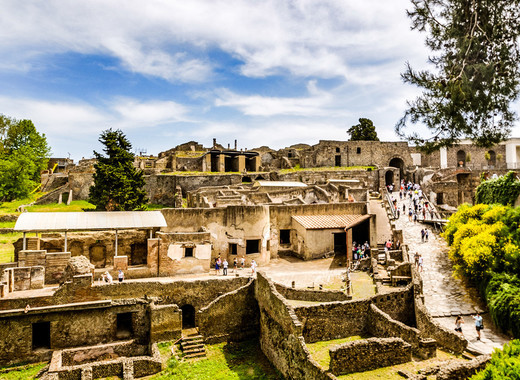 Source: Get your guide

Pompeii is one of the world’s most important archaeological sites. It is recognised as UNESCO World Heritage Site since 1997. Under Grande Progetto Pompei (GPP), €105 million has been invested in its preservation and restoration, of which €78 million is from EU funds. This should boost the economy by promoting tourism and related local industries. The work is intended to reduce risks from groundwater, stabilise buildings and protect them against the elements, and consolidate and restore walls and decorated surfaces. The project also improves video surveillance, visitor itineraries, green areas, signage and promotion of the archaeological site.

Completed in 2015, the first phase made it possible to open 12,500 m2 of new exhibition area to the public and provide disabled access to many buildings. The number of visitors has increased by 36%, from 2.47 million in 2013 to 3.37 million in 2016. By encouraging tourism, the GPP boosts related local industries and stimulates wider economic development and job creation.