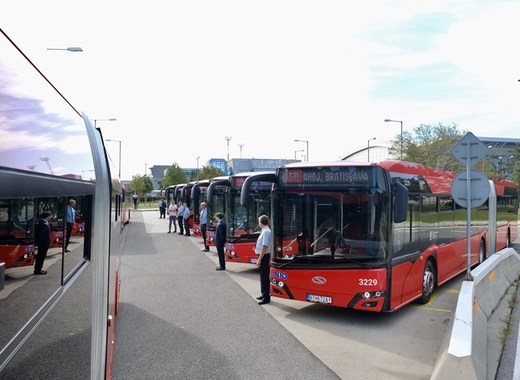 The Bratislava Transport Company announced that it is welcoming the latest addition to its fleet – 11 brand-new state-of-the-art buses that will propel the quality of public transportation in the Slovak capital to new heights.

Taking care of both the environment and consumers

The new buses are a first for Bratislava in one important regard – they are the first vehicles purchased by the company that are specially outfitted to accommodate the transportation of luggage. The 11 18-meter-long buses are set to bring an entirely new level of quality to the capital’s public transport network and will make mobility even more of a breeze.

The new buses were purchased prior to the coronavirus pandemic and their rollout has been in the works for a long time. The new vehicles, boasting additional storage space, will be put into circulation primarily on the so-called airport routes which are used by those travelling to and from Bratislava’s air hub.

"With the arrival of new Solaris New Urbino vehicles in Bratislava, the vision of the city and the Bratislava Transport Company for a qualitative leap in travelling by public transport began to be fulfilled while simultaneously adhering to the principles of economy and efficiency of spent financial resources. We still have a long way to go, but only through such investments can we offer the public an attractive way of transport around the city that is ecological, time-saving, economical, but most importantly - comfortable," said the Chairman of the Board of the Bratislava Transport Company, Ing. Martin Rybanský.

The new vehicles also adhere to the highest EU environmental standards and boast many features meant to make them more comfortable and attractive to the public. Through their incorporation into the city’s public transport network, authorities in Bratislava are giving yet another way for citizens to get around without relying on highly-polluting alternatives such as cars and allows them to contribute to Slovakia’s fight against climate change.