27 new social housing units to be built in Svishtov 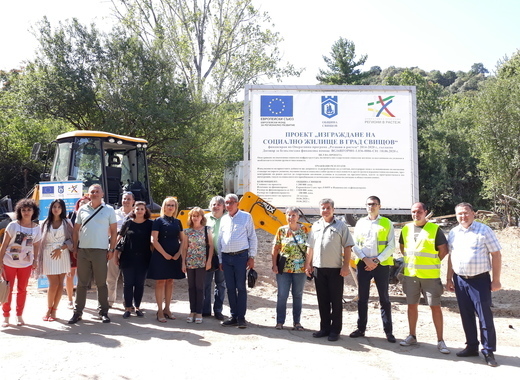 Some 27 new social housing units will be built on the territory of the Bulgarian municipality of Svishtov, according to a local government's press release. The project under which they will be erected is worth BGN 1.2 million (600,000 euros), funded by the program "Growing Regions" 2014-2020 and will be co-financed by the European Union through the European Regional Development Fund.

At a press conference, held on 2 September 2020, followed by a symbolic groundbreaking ceremony, the mayor of Svishtov Gencho Genchev and representatives from the municipal administration explained the objectives of the project. The public event was held in strict compliance with anti-epidemiological measures.

Integration of persons from vulnerable groups

The implementation of the project activities will lead to the provision of appropriate social infrastructure, including modern social housing for the accommodation of vulnerable and disadvantaged groups on the territory of Svishtov Municipality. In addition, preconditions will be created for the integration of people from these target groups, their social inclusion as well as their inclusion in public life.

Two of the apartments on the first floor of the building will be adapted for people with disabilities. In this way, the project will provide additional appropriate social infrastructure for people from vulnerable groups.

The municipality further added that the overall appearance of the existing three-storey building will be updated and renewed. The repair works will also include the installation of new windows, thermal insulation, modern energy-intensive lighting and heating.