54 French cities receive awards for the revitalisation of central sites 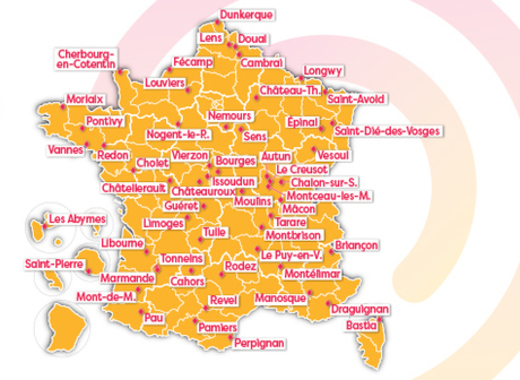 The French ministry of Territorial cohesion and relations with local and regional authorities, the Ministry of Culture, the City of Architecture and Heritage and the financial partners of the program Action Coeur de Ville - Territorial Bank, Action Logement and Anah have launched in December 2018 the programme Réinventons nos cœurs de ville (Reinventing the hearth of the cities). It has the objective to renew emblematic sites in the city centres by encouraging innovative urban projects. It has recently been announces that the State will support all of them in one way or another. Minister Jacqueline Gourault (Minister of Territorial cohesion and relations with local and regional authorities) announced that the 54 winning cities will be accompanied to launch a local call for projects in 2019, while the other 57 cities will receive tailor-made support to make their projects successful.

The participation in this call is considered a huge success, as half of the programme cities have shown interest by applying for support. Accordingly, among the 111 sites proposed for renovation one may find unused industrial fields, hospitals, elements of the heritage. From them 54 will have the opportunity to receive expert advice and 30 000 euro financial support.

Find more about the initiative from the Office of the Commissioner General for Territorial Equality (In French).