The investment is worth no less than 19.2 million euros 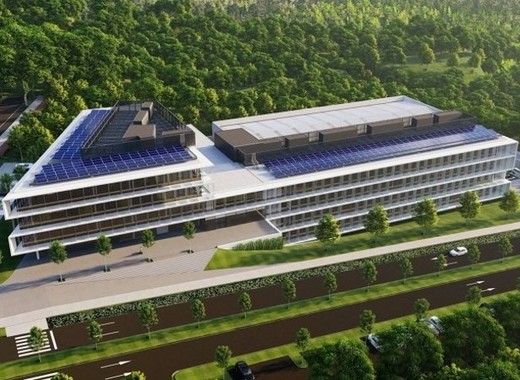 The Provincial Council of Bizkaia has announced a tender for the construction of the headquarters of the Ezkerraldea - Meatzaldea Technology Park. The building will house the Energy Intelligence Centre, a project aimed at positioning Bizkaia and the Basque Country (Spain) as an international benchmark in the field of energy.

Consisting of two blocks at different heights, the building will have a usable area of ​​18,932 square meters and will house offices, laboratories and an industrial warehouse. The tender's base price is 15.9 million euros including VAT, with contributions from the Basque Government and the Provincial Council of Bizkaia. The construction is expected to last 22 months, between November 2020 and August 2022.

The Energy Intelligence Centre will occupy the central area and the east end of the building in 7,907 square meters distributed in four floors of offices and laboratories and in an industrial warehouse.  The headquarters of the Ezkerraldea - Meatzaldea Technology Park will occupy the west end of the building and will have 5,416 square meters on four floors that will house conference rooms, meeting rooms and leasable office spaces.

In accordance with the project objectives, related to the development of new energy generation models, the building was designed with an innovative system allowing for a reduced carbon footprint. It will have a novel photovoltaic installation on the roof and façade, capable of generating 178.72 KW of power using renewable energy. Image: Provincial Council of Bizkaia

In fact, the main points of interest of this installation are its amorphous silicon panels that are integrated into the main façade of the building and that at first glance look like decorative glass sheets. These panels generate approximately 7 KW peak power, and with a light transmittance of 50% allow light to pass through them.

On the other hand, the rooftop installations are implemented using photovoltaic panels made up of latest generation monocrystalline high-efficiency photocells, with a peak power of 450 KW. This allows better use of the roof, managing to install a higher peak power in a smaller space than that intended for other installations. All the energy generated by the panels will be captured by state-of-the-art inverters sized so that the installation always works at its optimum point.

The Basque Country and the energy sector