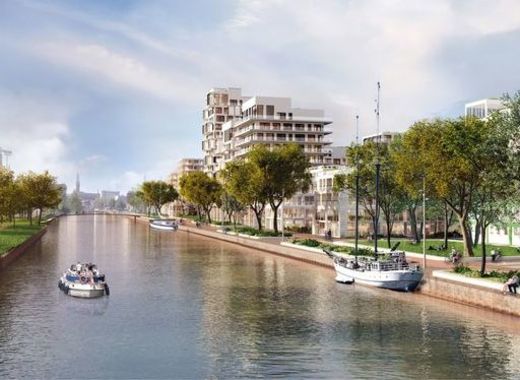 Groningen is one step closer to beginning the construction of Stadshavens - its new district on the water, according to municipal sources. The statement was released after the local authorities signed an agreement with developers for the joint construction of 2,400 homes in this area.

The project entails for the neighbourhood, located along the Eemskanaal, to be a space for everyone, with owner-occupied homes, social and rental homes and business premises that are built sustainably and without natural gas.

Stadshavens – a place for meeting and relaxation in Groningen

A lively urban district on the water, where every resident has his own place, a car-free space with modern urban architecture meant for meeting and exercising – this is what the future district of Groningen Stadshavens is set to become.

The project previews the construction of 2,400 sustainable homes located in the area between the Eemskanaal, Balkgat and Damsterdiep. Becoming a natural-gas free area, with no cars parked in the public spaces and the establishment of a new city park are also among the objectives of the new project.

Most of the land is owned by the developers VolkerWessels Vastgoed, VanWonen, BPD, Nijestee, Lefier and the municipality of Groningen. The parties are jointly investing in the public spaces: roads, cycling and walking paths, quays, and extra squares to become meeting spaces. The total investment for all parties amounts to 110 million euros.

“Groningen is one of the fastest growing cities in the Netherlands. This growth is expected to continue. We have a shortage of housing. There is a particular demand for high-quality homes that are sustainable, affordable and not too far from the centre. Over the next five to ten years, some 20,000 new homes will be added to the city. That is why we are investing heavily in housing” explains Alderman Roeland van der Schaaf quoted on the municipal portal.

The new city park will be an essential part of the Stadshavens living environment. Image: Municipality of Groningen

The plans for Stadshavens derive from the city’s environmental vision and the Eemskanaal zone development strategy from 2018. In the upcoming weeks, the municipality will also discuss with local residents, companies and stakeholders and collect their concerns and suggestions about the new city area development.

Natural gas occupies an important place in the history of Groningen with the Netherlands ranking among the EU countries most reliant on this energy source. In the Province of Groningen, near Slochteren one can find the largest natural-gas field in Europe and one of the biggest onshore fields worldwide, discovered in 1959.

Today the field accounts for half of the natural gas production in the Netherlands. However, growing protests after earthquakes induced by gas extraction and concerns about its impact on climate forced the Dutch government in March 2018 to announce the phasing-out of production in the giant Groningen natural gas field by 2030.