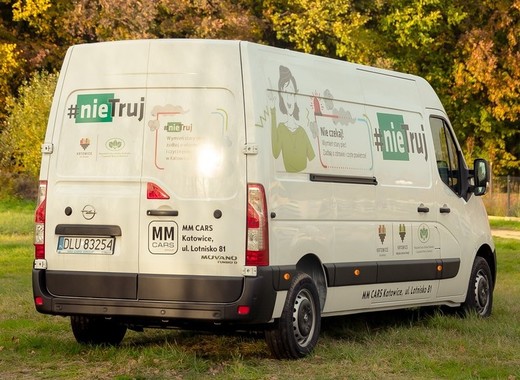 Katowice is one of many Polish cities fighting with air pollution, caused by the burning of coal. Like with other Silesian cities, the problem is to a large extent due to the widespread use of old coal furnaces and boilers at the households.

But even though a lot of municipal funds have been allocated to fight that issue and substantial progress has been achieved in the last couple of years, the problem remains serious to this day. A new municipal action – the Smogobus – aims to change this.

From October to December, municipal employees from Katowice will be educating residents about the proper behaviour to achieve cleaner air. For a couple of months, they will be travelling with a mobile information point – called the Smogobus – to almost all districts of the city in order to encourage as many residents as possible to replace coal boilers using municipal financial support.

According to estimations made by the Municipality, there are approximately 18 000 coal-based heating systems in the city. Unlike other local governments, Katowice has made the funds available to everyone meeting simple criteria. They can get up to 10 000 zlotys (2100 euros) for the replacement of heating devices, as Mayor Marcin Krupa explained for the city website.

Nevertheless, there are thousands of households, entrepreneurs or communities who have not taken the steps necessary to benefit from this opportunity. Hence, the info bus will be travelling from 27 October to 11 December, visiting 25 locations in the afternoons and on Saturdays, at times considered convenient for the residents.

During the visit, the municipal workers will give a short lecture on the available municipal programmes aimed to limit smog and promote clean air and the available subsidies. They will also give residents the possibility to submit right away a subsidy application for the replacement of coal heating devices with an ecological alternative.

The 30 million-zloty municipal funding given in 2015-2019, a period when the programme was accelerated, brough about encouraging results in Katowice. The city also puts an emphasis on clean public transport and the thermal modernisation of buildings. Finally, the municipality boasts the largest air quality monitoring system in Poland, operational since 2019.