A ‘supermanzana’ vision for the Barcelona of the future

Large-scale conversion of streets and squares into pedestrian advantage zones 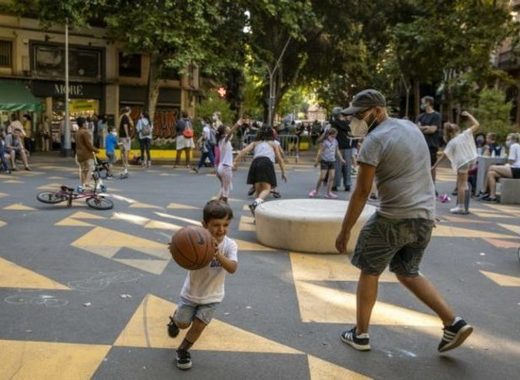 Back in the 19th century the urban architect Ildefonso Cerdá had an innovative vision of helping his city, Barcelona, break out from the confinement of its medieval perimeter and spread out in an orderly and flowing manner. That gave birth to the peculiar and distinctive octagonal blocks aligned along the straight avenues that criss-cross the district of the Eixample and have been a delight for tourists and architectural buffs until today.

The Catalonian capital’s City Council announced yesterday that the Cerdá Plan will serve as the inspirational basis for a new plan which will bring local urbanization into the 21st century by allowing more space for residents, pedestrians and greenery. This plan is provisionally called ‘supermanzana’ model, from the Spanish word for a street block – manzana.

This initiative was decided after the experimental ‘superblocks’ in Poblenou and Sant Antoni neighbourhoods were considered to have been successful. Now this will be applied to Cerdá’s iconic creation – the Eixample.

In Catalan, the word ‘eixample’ means expansion, and an expansion of sorts is what the city planners are after, however this time it refers more to conceptual expansion which will hopefully engender a new understanding for living in the city.

One in every three streets in the district will be turned into a green axis, in other words providing green lanes focused on biodiversity and not on traffic. The plan envisions the conversion of 21 streets into such green axes and the creation of 21 new small squares or plazas for community socializing.

When it is all done and ready, each Eixample resident will live at a distance of no more than 200 metres from such a green axis or square. When the works are completed, it is expected that this will free up 33.4 hectares of urban space for pedestrians, equal to an area like the Ciutadella park.

The transformation of streets and squares has been already put for public ideas competitions, with the condition that the proposals meet the criteria of accessibility, sustainability, energy efficiency and low environmental impact. The expected cost of the plan is valued at 36 million euros.