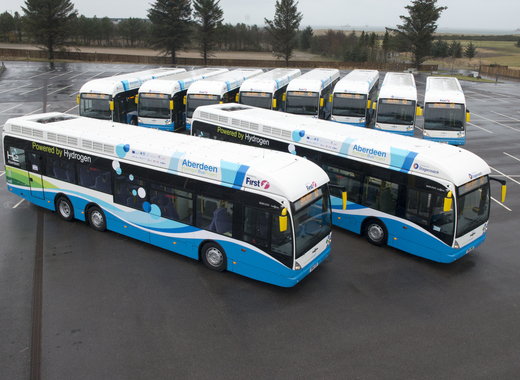 Aberdeen has been a trailblazer in Scotland in terms of adopting the widespread use of hydrogen buses in its public transport network – and local authorities have no plans of stopping. The city aims to keep up its efforts in staying ahead of the curve with officials announcing that they will further boost the local bus fleet with 10 new hydrogen buses.

Hydrogen – a key pillar of energy and mobility transition in Europe

Hydrogen is seen as one of the key pillars of Europe’s energy and mobility transition. In its efforts to fight climate change, the entire continent and its governments have found that hydrogen offers one of the best ways to accomplish their ambitious climate goals.

The Aberdeen City Council aims to further capitalize on this latest trend with this purchase. The 10 hydrogen buses come on top another 15 of the same kind that is already in the process being deployed on the streets of the city.

Expanding the use of hydrogen is also an important economic venue that authorities mean to exploit. By increasing the demand for it, new suppliers will become interested in entering the market and will allow Aberdeen to continue developing as a “Hydrogen Hub”.

Aberdeen City Council’s environmental spokesperson Councillor Philip Bell, stated that “Aberdeen has led from the front in promoting clean energy by having the most successful hydrogen bus fleet in Europe and seizing the opportunity to expand this further through the JIVE project is testament to this Council’s commitment to be a climate-positive city.

The future of road transport will be electric but where that electricity is derived is the question. Hydrogen fuel cells offer high power for heavy-duty vehicles, cars with exceptional range and refuelling times on a par with petrol or diesel. This investment is the next phase in Aberdeen’s hydrogen journey and will ensure that Aberdeen stays at the forefront of hydrogen technology to emphasis its credentials to become the world energy transition capital."