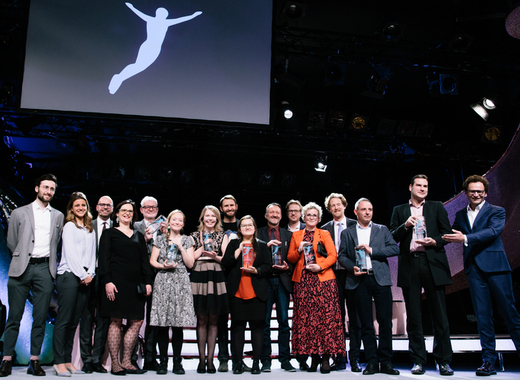 Attended by more than 550 guests, the awards gala on December 4 took place in the Tipi at the Chancellery in Berlin under the joint patronage of the German Federal President Frank-Walter Steinmeier and the Austrian Federal President Alexander Van der Bellen.

This year, 80 finalists and 8 winners in eight categories (Quality of Life, Prosperity, Jobs, Ecology, Civilisation, Democracy, Human Rights, and Community) were selected from a field of over 400 nominees for the best political projects. The jury, consisting of more than 1,000 European citizens, awarded their points in an online evaluation procedure.

Besides the core criterion of Innovation, three other criteria applied to all nominated projects: Participation, Building Trust and Sustainability. The winning projects this year came from Bulgaria, Finland, Germany (2), Italy, Lithuania, the Netherlands and the United Kingdom.

Edward Strasser, co-founder and CEO of Innovation in Politics Institute, said during the award ceremony: "We give courageous politicians and their extraordinary projects a Europe-wide stage. In this way we ensure that exemplary political work can be emulated in other countries. Several of the award-winning projects have already been implemented in other countries."

Guides for tourists with disabilities

The winning Bulgarian entry ‘Accessible tourism in Rila Mountain’, a project initiated by Georgi Kabzimalski, Mayor of Rila Municipality, aims to improve the access to employment and social inclusion of disadvantaged unemployed and inactive people. This is done by adapting and introducing an innovative service for offering accessible tourism - assistants for disabled tourists. Initially, 30 unemployed people were trained as tour guides for this project which is partnered by the Croatian Association Udruga Zamisli. 9 tourist routes are offered in Rila Municipality and environs for people with mild to more serious disabilities, including the UNESCO heritage site of Rila Monastery and the picturesque eco-trail “Stob Pyramides”.

Interested parties can check the tours and book a guide on the site of the project.

This is the first time a Bulgarian project has been credited with a prize since the first edition of the Innovation in Politics Awards in 2017. Five other projects from Bulgaria have been chosen among the 80 finalists in this year’s competition: “Innovative Schools: improving educational quality” (Krasimir Valchev, Minister of Education and Science), “Smart Library: allowing elderly to access information technologies” (Kalin Kamenov, Mayor of Vratsa Municipality), “DigitalKidz Steam Club” (Ivelina Atanasova, Founder of the DigitalKidz Foundation), “The Wonder Garden: a social enterprise for more opportunities” (Yordan Yordanov, Mayor of Dobrich Municipality), and “Healthy eating in nurseries” (Donka Mihaylova, Mayor of Troyan Municipality).