Alicante fire-fighters launch a solidarity campaign for toys and food 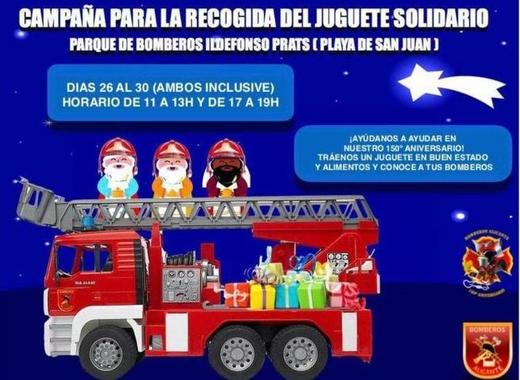 Following the prolific and abundant Christmas festivities across Europe, celebrated with high spirits and often accompanied by flamboyant and lavish demonstrations of wealth and prosperity, it is naturally a time to rethink the meaning of all the giving and taking and consumption that took place. Hopefully, all of you have enjoyed the holidays and managed to spend quality time with your families and relatives over the non-working days, but a lot of people were not so lucky.

There are those who were deprived of a warm Christmas meal or the opportunity to give a nice gift to their children. It is them that are in the focus of a charity campaign in the Spanish city of Alicante. The campaign is launched on the occasion of the 150th birthday of the fire-fighter service in the city. Residents and visitors are invited to donate toys in good state and food and thereby will have the opportunity to meet in person the restless fire brigade that takes care of their security 24/7.

The fire-fighters of the Spanish city will be collecting donations from 26th December 2018 until 30th of January 2019 included between 11 and 13h and between 17 and 19h, at the Ildefonso Prats Fire Department (Saint Juan Beach), Alicante, Spain.