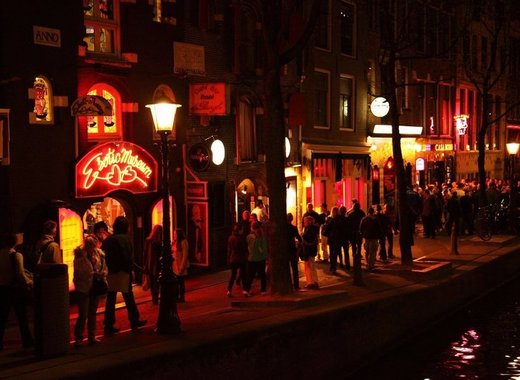 Tougher rules will soon apply to guided visits in central Amsterdam. Group tours along the prostitution windows (within or outside the district Red Light district) will be prohibited from April, announced the Municipality yesterday. Furthermore, there will be new limitations when it comes to touring outside of the area.

The group tours ban will be in place for De Wallen (the Red light district itself, in the medieval city centre), Ruysdaelkade, Spuistraat and the surroundings. Organising a guided tour in these areas will be punishable by a fine once the six-week adaptation period expires. The rules apply to all tours with a guide, including cycling and segway tours.

In addition, it will be harder to organise and conduct group visits to the centre outside the Red Light District. For example, the maximum group size is decreased from 20 to 15 people, without the possibility to recruit additional members. Night tours between 10 p.m. and 8 a.m. will no longer be possible, nor is sound amplification or the consumption of alcohol or drugs in the area.

The goal of the new rules is to calm the living environment for the residents, workers and entrepreneurs operating in the district. As calculated by local authorities, there are around 114 tourist groups passing around the sex district of Amsterdam, creating noise, taking unwanted photographs and causing trouble. The new policy wants to create more space on the street and ensure a more decent working environment for sex workers, or in other words – to keep the centre of Amsterdam livable for Amsterdammers.

Prostitution in the Netherlands is legal and regulated – sex workers are allowed to work in the light of day, are obligated to pay taxes and are not perceived as a threat to public order. The Red light district of Amsterdam is famous for its vivid displays of prostitutes standing in brothel windows, hence it has turned into a global destination for sex tourism. Soft drugs such as cannabis and hallucinogenic mushrooms used to be permitted for personal use, but that will no longer be the case after April.