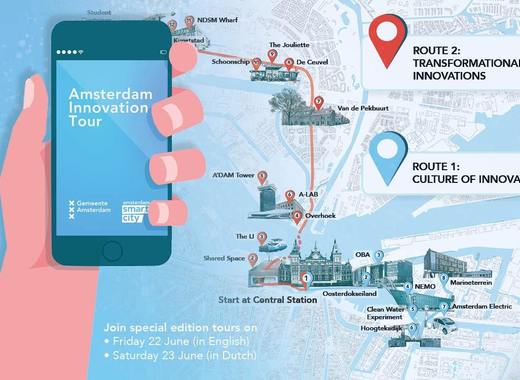 During “We Make The.City” innovation festival, Amsterdam Smart City and the City of Amsterdam released an app-based self-guided innovation tour. It was officially launched by Touria Melia, Amsterdam’s Vice-Mayor of Culture, Art and ICT, during the Next Generation Cities conference on 21 June.

The app is designed to help international delegates and local city users experience some of Amsterdam’s innovative approaches and solutions for smart and sustainable urban development. There are two routes to choose from, starting from Central Station. The first route “Culture of innovation” takes users along a two-kilometer walk along Oosterdokseiland development to Marineterrein, the former navy based that is being converted to innovation district. The second route, “Transformational innovations” leads users though Amsterdam North to De Ceuvel living lab and finishes at NDSM-wharf.