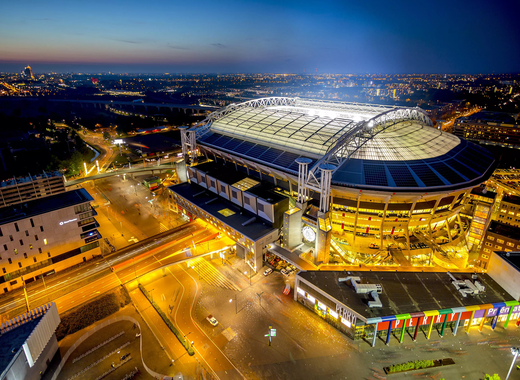 A massive energy storage system that includes new and used electric vehicle (EV) batteries has been switched on at Amsterdam’s Johan Cruijff Arena. It is capable of storing 3 megawatts of power – enough to charge 500,000 iPhones or supply 7,000 households in Amsterdam for one hour – and its makers say it’s Europe’s largest commercial energy storage system using EV batteries. The system combines power conversion units and the equivalent of 148 new and used Nissan LEAF batteries, which store energy captured by 4,200 solar panels on the roof of the stadium and also from the grid.

Its main purpose is to deliver back-up power to the stadium in case of outages or during heavy use. But as well as providing a reliable source of sustainable energy, it will also relieve pressure on the Dutch electricity grid during concerts and other big energy-consuming events. And during periods of low demand, the stadium can contribute power to the grid.