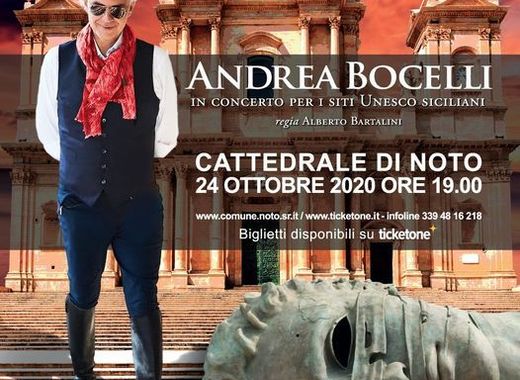 On Saturday 24 October, a concert by Andrea Bocelli will be held among the sinuous baroque architecture of the staircase of the Cathedral of Noto. The Italian city - a Unesco heritage site, will become the stage for an incredible and unique cultural and media event.

With 90 million records sold, Andrea Bocelli is one of the most popular artists of all time. In Noto, the tenor will be accompanied by the orchestra and choir of the Teatro Massimo Bellini in Catania, directed by Alberto Bartalini.

The event is organised thanks to the financial commitment of the Sicilian Region and the Municipality of Noto. A unique art-in-art event that will ignite a focus on Sicily's world-class assets. Noto is a city that is symbolic for the island's Baroque art.

The concert will take place with strict respect for the anti-Covid regulations. Tickets can be purchased directly online via www.ticketone.it.

"The initiative is nothing more than the launch of a virtuous path that sees as protagonists all the Sicilian sites registered in the World Heritage List for the first time, from their registration in the World Heritage List, called to network, to have only one vision, contributing to the growth of individual local communities, thus making Sicily grow at the same time.", declares the Mayor of Noto, Corrado Bonfanti

The project "Noto Città d'Arte" (Noto Art City), which includes important exhibitions, continues until February 2021. The initiative is supported by the Sicilian Region, through the Tourism Department, and by the Municipality of Noto, as well as by the Sicilian Regional Assembly, the Italian Ministry of Cultural Heritage, the Diocese of Noto, the South-East Chamber of Commerce and Unicredit.