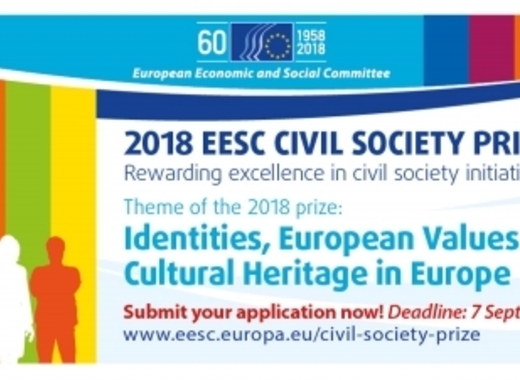 Theme of the EESC Civil Society Prize 2018 is "Identities, European Values and Cultural Heritage in Europe". The prize will reward innovative initiatives carried out by civil society organisations and/or individuals on the territory of the EU and aimed at raising awareness of the multiple layers and richness of European identities, exploiting the full potential of Europe's cultural wealth, facilitating access to European cultural heritage and promoting European values (respect for human dignity and human rights, freedom, democracy, equality and the rule of law).

The aim of the Civil Society Prize, which is awarded annually, is to reward and encourage tangible initiatives and achievements by civil society organisations and/or individuals that have made a significant contribution to promoting European identity and integration. Its overall objective is to raise awareness of the contribution that civil society organisations and/or individuals can make to the creation of a European identity and citizenship in a way that underpins the common values that shore up European integration.The prize, which has a total value of 50 000 € and will be awarded on 13 December 2018, is open to civil society organisations officially registered within the European Union and acting at European, national, regional or local level. It is furthermore open to individuals.The deadline for submitting applications is 7 September 2018.