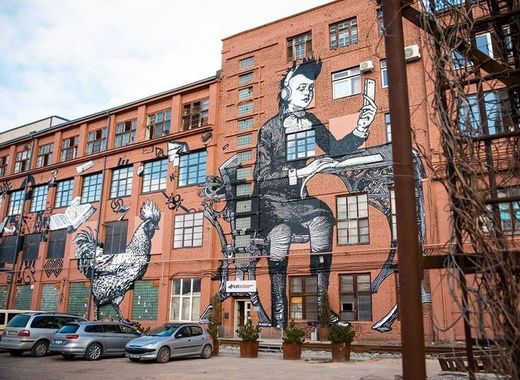 Streets in Kaunas, Lithuania’s former capital and second-largest city may be more deserted than usual due to the coronavirus restrictions, but Kaunas street art lives on. Yesterday Kaunas Street Art Gallery got a new addition of impressive scale and visual impact under the open sky.

Local team of artists Gyva Grafika have turned the gloomy wall of the old "Drobės" factory into a canvas symbolizing the harmony of the old and the new.

The drawing, called “PS”, is another work of the programme Kauno akcentai (Kaunas Accents) and the project Gyvos sienos (Living Walls) which is unfolding for a second year now. “PS”, covering an area of ​​up to 1100 sq m, is one of the largest street art drawings in Kaunas so far.

Street artists Žygimantas Amelynas and Tadas Šimkus chose the building of the former Drobės factory in the industrial quarter of the Lower Šančiai not by sheer chance. Uniting the old and the new is the main concept of their work, therefore the authors support the trend of reviving abandoned buildings by turning them into creative and leisure spaces.

"This drawing represents a correspondence between two young people. Time present and time past intertwine with each other, existing simultaneously, creating a paradoxical expression and an atmosphere never felt before. Just as an old building continues to exist in the present, accommodating historical fragments, so do eccentric contemporary characters send each other lost messages in time,” said Ž. Amelynas, interviewed by the municipal website.

The artists, who have been transforming the factory façade for almost three weeks, had to work in extremely challenging conditions, braving rain, strong wind, the heat of the sun during the day and sub-zero temperatures at night. They also had to work stepping practically on the train tracks that stretched along the building.

The Living Walls gallery is filling up

“Kaunas Accents” is a competition of ideas that has no analogues in Lithuania. Its participants decorate various places in Kaunas with their works. The implementation of the approved ideas is financed by Kaunas City Municipality.

Since the start of the programme, 40 “accents” have appeared in various parts of the city. Kaunas residents can also contribute to the emergence of new professional works of street art. They can do this by giving the gray walls of their buildings to artists through the Gyvos sienos platform.

And although it is hard to get out of the house and look around the city gallery now, it is possible to do it virtually.