As Mayor of Toulouse, my goal is to improve the lives of my constituents while defending the Republican and the European values

“Toulouse is a beautiful place to discover and to fall in love with. We are waiting for you!” 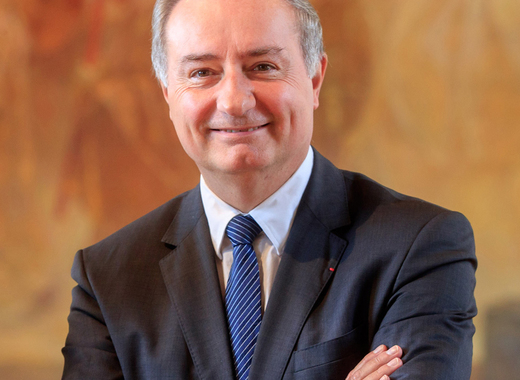 Jean-Luc Moudenc was born on 19 July 1960 in Toulouse. He was educated at the Toulouse 1 University Capitole and worked as a journalist. He entered in the local politics shortly after graduation. Moudenc is mayor of Toulouse since 2014, having previously held the position from 2004 to 2008. Why Toulouse is called the "Pink City"?

This is a good question! One needs only to stroll for a while in Toulouse, particularly in the historical centre looking up in order to notice the particular shade of our facades, between ochre and land of Siena. This is the origin of this name. This particular "rose" has been the colour of the material used in the construction of our buildings for centuries: the fairground brick, very specific in its dimensions in 42 x 28 x 5 cm. Already used at the time of the Roman city of Tolosa, the brick gives to our city a rich palette of colours that oscillates from pink to orange-red depending on the time of the day and the season.

Toulouse has the highest population growth over the past 20 years and the local economy is growing faster than anywhere in France. What these facts are due to?

It is true that Toulouse is the beating heart of our metropolis of success. We welcome more than 12,000 new inhabitants per year and we count 15,000 births annually which represents 2% of the total number in the country. Moreover, the GDP of Toulouse increased by 22% in ten years. Why? For me, the reason for its attractiveness is very simple: our living conditions make you want to come here, to have a family and children here. The city's identity generates attractiveness because of the strong tradition of innovation and entrepreneurship. It is undeniable that aeronautics and space sector have helped make Toulouse an attractive city from an economic point of view. But other sectors are also widely represented here, such as artificial intelligence, Internet of Things, health, biotechnology, the social economy and solidarity ... We also have the ambition to open in Toulouse an interdisciplinary Institute of Artificial Intelligence in response to the call for expressions of interest initiated by Cédric Villani.

Toulouse is among the most dynamic French city and is constantly developing. Numerous projects are underway, could you say a little more about the most significant of them.

We have launched many urban development projects, aiming to valorise our heritage and quality of life, inseparable from our Occitan identity, while at the same time preparing the city to receive new inhabitants. I am thinking in particular of the Toulouse-Center project, conducted with the help of the Catalan urban planner Joan Busquets, who transformed Barcelona. For us it means to rehabilitate some of the central axes, but also to transform the Jean Jaurès paths (connecting the station neighbourhood to the city centre) in rambles - warm and southern gardens.

It is in this new district that will rise the tower Occitanie, signed by the international architect Daniel LIBESKIND, that will incorporate beautifully greenery with buildings. I therefore hope that this will provoke, apart from the admiration to the architectural prowess, an inspiration for all future constructions. In addition to these emblematic development projects, I still want to underline that 90% of the investments of the community (city and metropolis) go in the outlying districts in the city centre.

Toulouse is the centre of the European aerospace industry. At the end of the year you are planning to inaugurate the memory space of  "The Trail of the Giants". Could you say a little more about this unique project?

It took us four years to bring this magnificent project to an end. Four years during which, step by step, we have conceived, matured, realized and refined this place of erudition and memory which pays tribute to the pioneers of civil aviation in general and the Air Mail in particular; we called it "Pioneer Flight". At the opening to the public, on 22nd and 23rd December - one hundred years after the first air connection between Toulouse and Barcelona - curious and enthusiasts will discover exceptional documents, unique historical objects, and even a flight simulator Bréguet XIV: the first aircrafts operated by Aéropostale as part of trans-Saharan crossings.

Realized on the historic site of the Latécoère lines company (turned into Compagnie Generale Aéropostale in 1927), the "Pioneer Flight" is linked to the Montaudran Giant Trail, where the Hall of Mechanics, the Gardens of the Line and the renovated Track. The latter, lust like a thread connecting the ages, links the Pioneers' Flight to building B612, where the electric aircraft of tomorrow is being prepared.

The city counts two UNESCO World Heritage Sites and has strong connections with European History and Culture. How do you preserve and promote these strengths of the city?

Indeed, the Saint-Sernin basilica and the Hôtel-Dieu Saint-Jacques were listed as World Heritage by UNESCO just 20 years ago, as part of the series "Pathways to Santiago de Compostella in France ". It should not be forgotten, however, that the 12.6 km of waterways of Toulouse Canal du Midi and the Canal de Brienne have been classified as "Canal du Midi".

Toulouse is a city of art and history with an important architectural, cultural and artistic heritage that we are committed to preserving and showcasing. We have set ourselves the objective of putting forward the historic heart of Toulouse. This ambition is reflected in particular in our undertakings for the renovation of the basilica of the Daurade, the walls of Saget in brick on the banks of the Garonne, or the Ramier Island which is being converted into an immense natural space in the heart of the city.

What do you think about a unified platform for TheMayor.EU - the European cities and citizens and one of its main goals to support the exchange of experience and information between the EU mayors? How can we be useful to you?

Being a mayor is, in my opinion, the most beautiful of all mandates. I have been involved in politics since I was a student, with the same passion and the same energy as when I was twenty. As Mayor of Toulouse, my goal is to improve the lives of my constituents while defending the Republican and the European values.

That's why I wanted Toulouse to be among the European municipalities listed on your site. The feedback from my colleagues will be an interesting asset to measure the progress of our cities respecting the barometer of local democracy.

In addition, being mayor in 2018 means more than ever to be close to the inhabitants, maintaining cooperative relations with the communities and their representatives. This knowledge is unique to everyone, but it can be useful to share it in order to improve, simply.

Toulouse is a spectacular tourist destination. What would you say to our readers, which are willing to visit the city?

I would tell them they are not mistaken by choosing Toulouse as their destination! With its favourable climate, its rich heritage, its dynamism, its southern joy of life and its legendary conviviality (convivencia), Toulouse is a beautiful place to discover and to fall in love with. We are waiting for you!