Citizens can already travel on the Great Walk of Athens, development of which began just last month 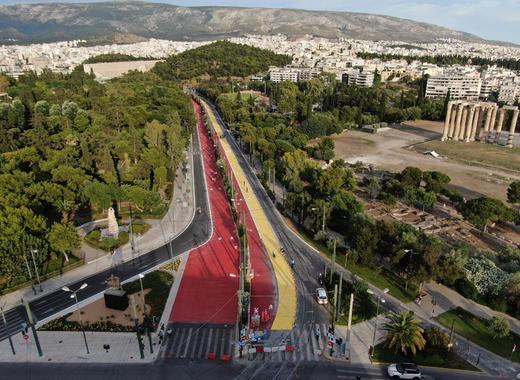 As TheMayor.EU reported earlier in May, the city of Athens embarked on one of its largest redevelopment journeys – namely through the implementation of the “Great Walk of Athens” project. The 6.8 kilometres of cycling and walking paths in the centre of the Greek capital are meant to provide locals and visitors with the perfect opportunity to explore the city while simultaneously remaining environmentally friendly.

The redevelopment project has been in the works for over three decades but now finally it is within reach. And while it is expected for it to be finished and for construction work to be wrapped up by 2022, the “Great Walk” is already being made use of by locals in the city.

Just last week, work began alongside the Panepistimiou Avenue. The mayor of Athens, Kostas Bakoyannis stated that ”For approximately 35 years we have been discussing the transformation of Panepistimiou Avenue. It took us a generation to try, but it is high time to do it” on his Facebook profile.

Meanwhile, however, other stretches of the “Great Walk” are already full of cyclists and pedestrians – like for example the part alongside Vasilissis Olgas Avenue.

Upon completion, the massive redevelopment project would have covered an estimated area of some 50,000 square metres. All of them would have been impacted to some degree by the renovations that connect all parts of the Greek capital in order to make it more accessible and environmentally friendly.

A side benefit of the project is the enormous economic impact it has in the aftermath of the coronavirus pandemic. Such projects are of paramount importance to local administrations across the whole of Europe who are on the lookout for strategic investments that would result in the greatest net benefit for all citizens.