Badalona Police Force will patrol on Segways this summer

The small transporter can aid mobility in crowded areas 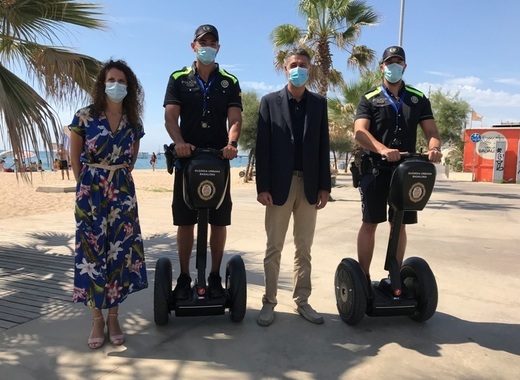 Xavier Garcia Albiol, who is the Mayor of Badalona, presented today two Segway transporters that were given as a gift to the local police force. The small vehicles are meant to help patrol areas near the beaches this summer.

Badalona is a satellite town of Barcelona, lying to the north-east of the Catalonian capital. Just like its larger neighbor it has a long beach area which gets crowded in the summer months.

Officers from the municipal police force will now dispose of two Segways so they can have a better visibility and mobility along the coastal promenade. The transporter vehicles have some indisputable advantages when it comes to this context.

They have greater maneuvering abilities thanks to their gyroscopic mechanism allowing them to make sudden turns. They also serve as platforms for the people standing on them permitting them to see further away.

The Segways can develop speeds of up to 20 km/h which can help patrolling officers cover larger areas in less time than if they were on foot.

“The presentation of these vehicles, which the City Council has acquired as property, is great news for the city because they are a new tool that we have seen working very well in other municipalities and a further proof that we are committed to the presence of officers on the street level, and to providing the Municipal Force with the best means to guarantee the safety and coexistence on the streets of Badalona,” said Mayor Albiol.

Even more, the Segways are environmentally friendly. After a full charge, they can cover up to 50 kilometres, which is estimated to be enough for the duration of the patrolling officers’ shifts. In any case, the transporters are easily rechargeable in electrical sockets.

The Municipal Police Force of Badalona is also supplemented with auxiliary officers who help in the patrolling duties. Once the beach season is over, the Segways will be used for patrolling commercial centres.