The new trainsets will boost services on L5 line 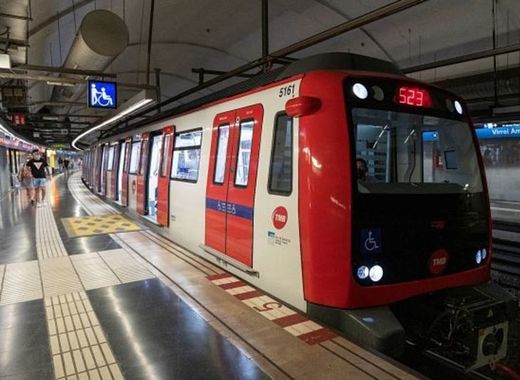 TMB, the transport authority of Barcelona, has announced that it will launch a new second generation train (from the CAF 5000 series) this week on line 5 of the subway. This train will join other two of the same type, which have been operational since last Friday, and another one that has been working since 8 June.

The new trainsets were manufactured by Construcciones y Auxiliar de Ferrocarriles (CAF) in their factory in the Basque town of Beasain. The new 5000 series are nearly identical to the trains already carrying commuters on the lines 3 and 5 of the urban network.

However, there are slight modifications to the interiors of the cars. These concern the introduction of wider spaces for wheelchairs (4 in total), located at the extreme ends of the composition, and the installation of emergency buttons for people with reduced mobility. The central sections of the trains also have spaces where bicycles can be stored during the journey.

There are wider spaces for wheelchairs inside the trains. Source: Miguel Ángel Cuartero (TMB)

Each trainset can transport 927 persons, of which 108 can be seated. The cars are interconnected in a way that forms a continuous corridor that allows for unrestricted movement inside. The trains have a length of 86 m and can develop a maximum speed of 80 km/h.

The extended fleet will now make it possible to have 34 compositions serving line 5 during peak times. Service on line 1 will also be beefed up with the addition of four CAF 6000 trains, which will arrive by the end of the year.

In total, TMB has invested 92 million euros for the purchase of new trains. Apart from the 8 already mentioned, there are four other trains for lines 3 and 4, of which only one remains to be delivered.