Barcelona metro shows how crowded the upcoming train is 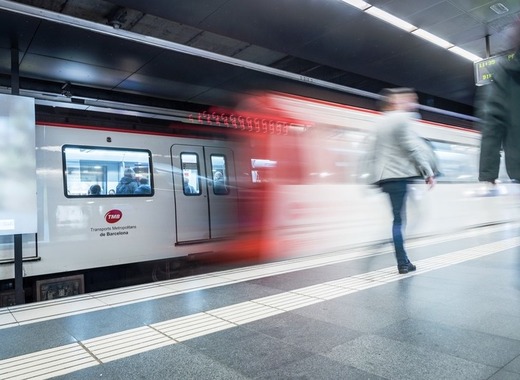 Rush hours on the Barcelona (and any other) tube can be particularly challenging for commuters. Overcrowded metro trains can turn into a nightmare for those who board at stations other than the terminals.

Yet, the Metro of Barcelona shows that there is a rather simple way to adapt even to this necessary evil, using contemporary smart technologies. Since mid-February, three metro stations are showing the level of occupancy of the upcoming trains on a scale from 1 to 4.

Real-time information is received from sensors installed inside the trains. It inducates the levels for each one of the five cars of the train, Transports Metropolitans de Barcelona (TMB) explains.

Making efficient use of space in public transport

This can prove particularly useful for passengers waiting on the platforms as they can decide to move to the less crowded cars or wait for the next train. This also applies to tourists, as the supporting indicative texts appear in Catalan, Spanish and English.

The selected stations for the benchmark test are Hospital Clínic, Entença and Sants Estació on line 5, one of the most popular lines with users of the metro in Barcelona. The stations, too, have shown either medium or high occupancy levels on the average.

The test is being carried out by an external contractor at a cost of 100,000 euros. This includes the development of the software, the installation and the maintenance for two years. Should the tests show good efficiency, the possibility to extend the solution to other stations on the network will be considered.

Smart use of public transport data

In general, the Metro of Barcelona obtains a large quantity of information regarding its circulating trains. It is usually put to good use for the efficient management of the system.

However, in this case, data can become useful to passengers, too. Finally, the digital experience aims to increase passengers’ comfort, explains the transport company.