Beer bikes in the centre of Prague will be no more

Despite their high appreciation by tourists, these mobile attractions are believed to spoil the traditional image of the city 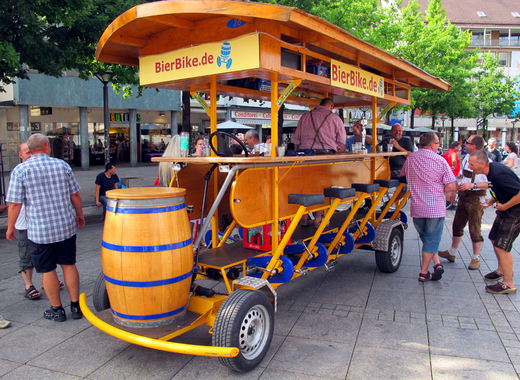 The alcohol-serving carts for tourists called beer bikes are soon to be banned from the centre of Prague. The introduction of the ban is yet to be approved by the municipal transport department, which is determined to limit the undesirable manifestations of tourism. With this respect, beer bicycles, which can hold around 15 drinking tourists, are considered as a manifestation of "alkoturism". Once approved, the measure will be implemented for a car-free zone or a wider area where cars weighing less than six tonnes are not allowed, which includes most of the Prague Conservation Area in Prague 1 and 2, the second extends to Prague 4, 5, 6 and 7, reports Echo24.cz

The City Council of Prague also addresses the effect on the traditional identity of the historical centre by costumes and mascots. The governance of Prague 1 and the City Hall also deal with the question of so-called visual noise, i.e. non-aesthetic manifestations of commerce and tourism in the city centre. On top of beer bikes, this includes fake old cars or illegal advertising. Prague City Councillor for Culture Hana Třeštíková reports that the municipality is finalizing the amendment to the street art decree, which should refrain the manifestations, for example, of people in giant bear costumes or people with annoying bubble blows.

Marek Beneš, Deputy Chairman of the Prague 1 Chamber of Commerce, agrees with the restriction of beer wheels. "This type of business is completely contrary to the interests of the population, the historical tradition and the spirit of old Prague," he said. He added that similar issues should be addressed conceptually and therefore proposes the creation of a working group composed of representatives of Prague 1, the Municipality and the Chamber.