This should make the city more resilient to climate change 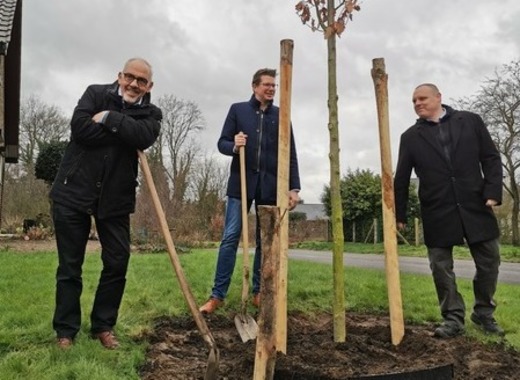 Source: The Mayor and aldermen of Beringen planting trees / Beringen.be

The benefits of greenery

The executive body of the municipality consisting of Mayor and Aldermen joined other Flemish authorities in their commitment to planting more trees earlier this week. Their pledge consists of the planting of 1,200 more trees in the period of 2019-2024.

Planting trees is associated with the reduction of the effects and speed of global warming, as they absorb carbon dioxide, explains the municipality. Trees also counteract important climate change factors like heat, drought and floods.

"In addition to the climate aspect, trees have many other advantages," explains Green Alderman Jean Vanhees, quoted by the municipal website. "For example, they are air-purifying, form a noise buffer, promote mental health and benefit biodiversity."

He clarified that the first 200 trees were already been planted last year and over the course of this year's spring. The city has also signed a commitment with the Sustainable Green Centre, in collaboration with the inter-municipal waste company of Limburg and Diest.

Thanks to this agreement, the city receives 50 climate trees every year and a one-off budget from the Limburg province, equal to approximately 50,000 euros that are to be used for the planting of trees.

In the autumn of 2020, a solemn signature of the tree charter will be organized for the participating local authorities in Flanders. What is more, as we have written in the past, several EU cities and regions have also launched ambitious tree-planting projects, including Debrecen (Hungary), Zadar (Croatia), Algarve region (Portugal).

Finally, similar initiatives exist on a global level. The United Nations Economic Commission for Europe (UNECE) has launched an initiative to stimulate mayors and local governments to plant more trees, and thereby increase the resilience and liveability of cities.