Blue-green roofs to be installed in Amsterdam

The project has been awarded European funding of 4.8 million Euros 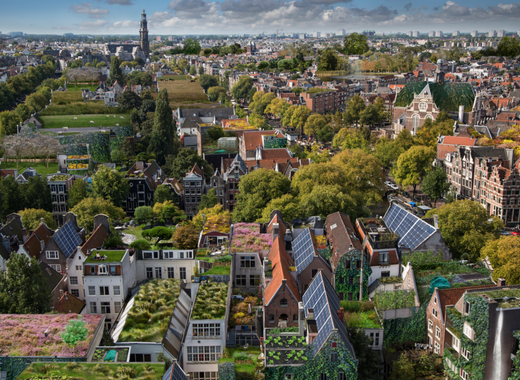 Amsterdam will install blue-green roofs in four areas of the city - Bellamybuurt, Geuzenveld, Oosterpark and Kattenburg. The project has been awarded European funding of 4.8 million Euros and will be laid over a three-year period. The idea of blue and green roofs is a new form of sustainability and the work is set to begin soon.

Blue-green roofs are able to absorb much more water than ordinary green roofs. The roofs will be able to protect the homes and neighborhoods from the effects of heavy showers or heat and drought. The new roofs will also incorporate a system of sensors. This will allow them to retain or release water according to the weather forecast. The roofs will also be linked in a network, which will allow them to work together. In addition, a wider variety of plants can be grown on blue-green roofs, which is good for biodiversity.