Among the essential and sustainable sites to see are also destinations in UK, Czechia, Poland, Spain, Austria and Italy 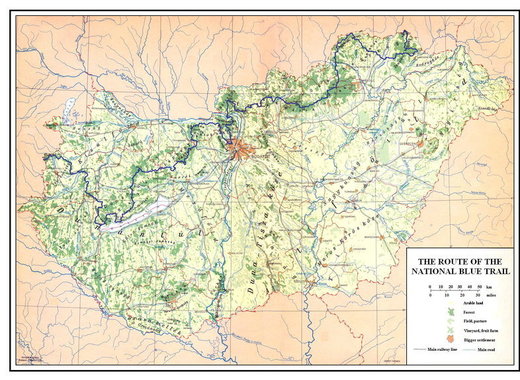 The international website of National Geographic magazine has listed the National Blue Trail in Hungary among the planet’s 25 most exciting destinations to visit in 2020.

Although Hungary is deprived of high peaks, its Blue Trail is a wonderfully diverse web of paths labeled with white-and-blue-striped waymarkers, says the magazine. The 1,167 kilometres-long trail meanders from Irottko Mountain, on the western border with Austria, to the northeastern village of Hollóháza near Slovakia.

The National Blue Trail is recognized as Europe’s first long-distance trail given its origin in 1938. It is part of the nearly 6,500-mile European long-distance walking route E4, which begins in Spain and ends (with ferry connections) in Cyprus. So, it can be experienced both as a launchpad for an epic cross-Europe track or as a wonderful singular destination.

The best time to go there is from August to September. Hikers should obtain a Blue Trail passport in order to earn stamps at checkpoints along the route, which is divided into 27 sections. Collecting all 147 stamps guarantees a coveted Blue Trail Badge.

The National Blue Trail is professionally operated by the Hungarian Hikers Association. You can find a detailed and sectioned guide to the complete hiking route on the Association’s website Természetjáró.hu, available in Hungarian, English, German, and Slovakian, as well as on their free Természetjáró app. Navigation can be done even in offline mode and the user interface follows the language of the device so foreign tourists without local knowledge will not get lost.

Seven other EU sites among the best to visit

Creating its annual Best Trips list, National Geographic has  collaborated with the editorial teams of its 17 international editions and with its own globe-trotting experts. Traditionally, only essential and sustainable sites from all over the world have been selected.

7 other EU locations are listed among the most exciting travel destinations of 2020: the town of Telč in Czechia, the Wales Way in the United Kingdom, Asturias and the Canary Islands in Spain, the city of Parma in Italy, the Grossglockner High Alpine Road in Austria and the Białowieża Forest in Belarus/Poland.