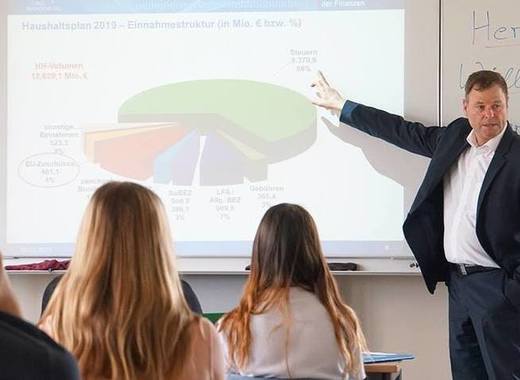 “Europe comes to school” or “European Union Project Day” is the name of an EU-wide yearly program, started by Angela Merkel in 2007, during the German presidency of the Council of the European Union. Its aim is to bring young students, the group showing the fastest growing interest in the EU, closer to the politicians that represent them as well as the European Union as a whole.

Every year on the 25th and 26th of March, German members of the European institutions, members of the national parliament and government as well as members of the regional and municipal governments, visit schools in the country to discuss the European Union, its future and everyone’s place in it. This year marked no exception, as we take a look at Schönefeld, Brandenburg. Minister of Finance of Brandenburg Christian Görke paid a visit to the Protestant School of Schönefeld. With the students, he discussed state finances in general, as well as European financial policies and EU funding in Brandenburg. The participating children had the opportunity to ask questions about things that they find interesting – such as Brexit, travel opportunities and the financing of school and universities.