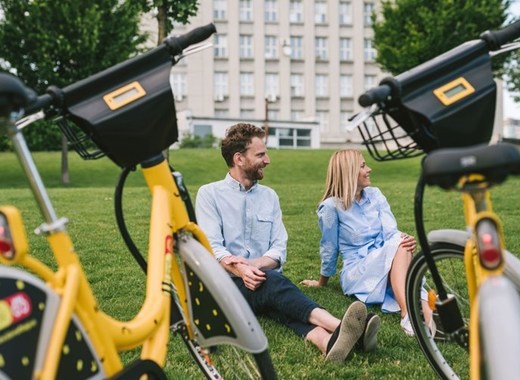 Bikesharing has risen in the ranks of the most important urban transport innovations in recent years. The availability of shared bikes in large cities has allowed for many citizens to ditch their cars in favour of the more environmentally friendly and healthier alternative of cycling, thereby not only improving their own physical wellbeing but also safeguarding nature.

And while bikesharing was forced to take a step back in recent months due to the coronavirus pandemic and the associated epidemiological and hygienic requirements, it is now coming back stronger than ever before in the Slovak capital of Bratislava.

The city’s bikesharing service Slovnaft BAjk is entering its 2nd season this year with a singular goal in mind – expansion and improvement. Currently, one can rent the yellow Bratislava bikes in four of the capital’s districts from a total of 83 docking stations. The number of stations will increase by at least 20 in the summer, while the city also embarks on reconstruction efforts in many areas that would allow not only for the expansion of bikesharing but also for more easily accessible and safe travel by bike.

One of the principal goals of Bratislava’s local administration is to make cycling popular among the city’s youth. Through large-scale development projects, young people would have the opportunity to use bicycles more freely and will be able to reach more places in the city, thus reducing the need for them to consider buying a car.

The government is aided substantially by Slovnaft’s own eagerness to promote and better its service. On top of the aforementioned developments, the bikesharing operator will add another 150 new bicycles to its fleet, boosting its total to 850 and will look for new locations to which to spread their reach and availability.

By working together, Bratislava and Slovnaft are creating an urban environment that is substantially more accommodating to cycling and are acting on the need for alternative transport solutions meant to protect the environment and promote a healthy lifestyle.