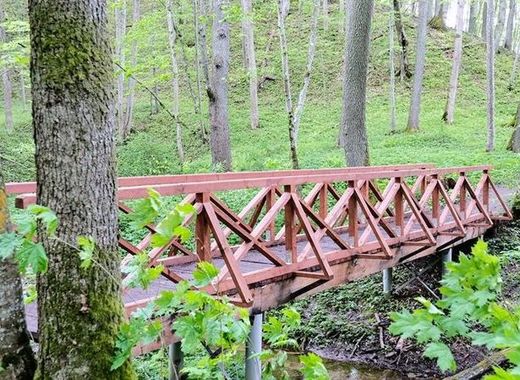 The bridge over the Kirmija stream in the Vidzgiris Botanical Reserve in Alytus has been renovated. The old worn-out bridge, which had broken in many places, was replaced last week by a new, safe wooden structure.

The Lithuanian municipality used the humble occasion, inviting locals and guests to take a walk around the unique reserve, home to rare and protected species of plants, birds, amphibians and insects. With a caveat: remember to keep a safe distance from other visitors, as a coronavirus precaution.

None of the largest cities in Lithuania has such a forest as the Vidzgiris forest, boasts the local government. 388 ha out of its total area of 452 ha was declared a botanical reserve in 1960. In 2009 the Vidzgiris Botanical Reserve was included in the European network of protected areas "Natura 2000".

But the Vidzgiris forest is not just beautiful nature all around, as it hides a grim secret from the Second World War. Here is the Jewish Memorial, marking a place where Jews were shot and buried in common graves during the war.

Haunting war memories are quickly dissipated, however, when one sets foot on the reserve’s 10 km long hiking trails. They are equipped with orientation signs and information stands telling about the inhabitants of the forest.

Vidzgiris Forest is home to the largest woodpecker in Lithuania (woodpeckers are protected throughout Europe). The golden beetle (Osmoderma eremita), one of the rarest beetles in Europe, lives in the oak groves, aged 100-120 years. To present the reserve’s natural heritage in a nutshell, there is a special 4 km circular educational trail, which starts from the parking lot.

The largest adventure park in Lithuania

Walking along the paths of Vidzgiris Botanical Reserve, one can reach Radžiūnai mound. According to legend, the mound, situated on the left bank of the Nemunas River, was erected by two brother princes to defend themselves from enemies. There is a fireplace at the foot of the 35 m high artificial hill. Recently, two more mounds were discovered next to it, testifying to the existence of a prehistoric settlement dating from 2000 BC.

From here, the forest trails lead to Tarzanija Adventure Park, the largest adventure park in Lithuania, spreading over a picturesque area of ​​13 hectares. Alytus local government is convinced that the region’s pristine nature, entertainment potential and cultural heritage will continue attracting tourists in spite of the coronavirus scare.