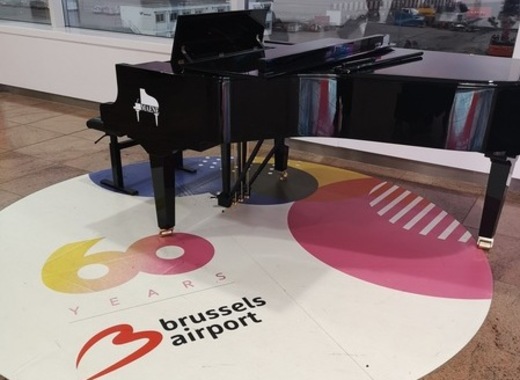 This year Brussels airport Zaventem celebrates 60 years. This key gate in the Capital of Europe has been visited by numerous important people over the years such as Prince Albert, Queen Elizabeth II, Presidents Nixon, Obama, Putin, Pope Jean Paul II. The first Boeing 747 Jumbo Jet from Pan Am landed in Zaventem in 1970, three years later the capacity of the airport was extended from 6 to 8 million passengers. In 1879, a cargo complex was opened. Fourteen years ago a new terminal opened, in order to meet the requirements related to the increased passenger volume.

It is estimated that passenger flow of Brussels airport today can reach as high as 25 million people per year travelling to a total of 238 destinations worldwide. Airport officials aim to use the force of the human flow for good, through several smart-designed charity initiatives. An interesting example is the transparent collector-jar allowing comparison of success rates of four charities, as well as Water with a cause.

Happy birthday, Brussels-National and thank you for the wonderful journeys!