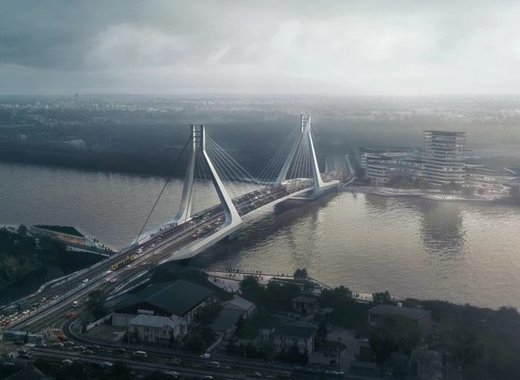 The Budapest City Council has given the go-ahead to the construction of the new Galvani bridge over the Danube. As reported by portfolio.hu, David Vitézy, CEO of the Budapest Development Center detailed, at the last session of the Council, the plans for the new bridge which will connect the two southern sides of the city.

The Galvani Bridge and the connecting boulevard will integrate the radial highways and motorway entry sections to Budapest,  bypassing the city from the west and southeast. With the new bridge, chronic traffic congestions on the busy Kálmán Boulevard - Rákóczi Bridge route would be alleviated, as more vehicles would choose the Galvani Bridge, avoiding crowded bridges in the city centre, like Petőfi or Elisabeth Bridge.

World-famous Dutch UNStudio partnered by Buro Happold Engineering had won the international design competition for the new bridge in 2018, Vitézy recalled, describing the design as “excellent”. He addressed some of the concerns which had emerged during the public discussion of the project.

The Air Task Force and the Hungarian Cycling Club have cautioned that the planned new road system around the bridge would generate new traffic. So, central roads inside the city like Üllői need to be prepared to connect the streets leading to the new bridge in such a way as to avoid overcrowding by cars.

Reducing traffic in the city centre

Beyond exploiting the urban development potential of North Csepel, Újbuda and Soroksári Road, the new bridge can reduce the daily traffic in the city centre by at least 37,000 cars.  This is an important goal for improving air quality and climate protection in Budapest.

The new Danube Bridge and the associated boulevard will serve as urban highways complete with level junctions and zebra crossings. This will not be just a new traffic corridor, but an axis for the development of surrounding neighbourhoods, the transport expert pointed out.