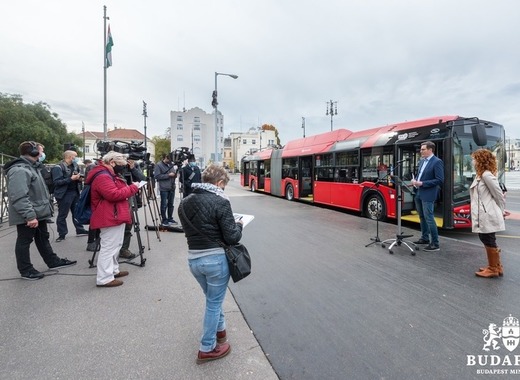 Replacing diesel buses with trolleys, for example on Bajcsy-Zsilinszky út - Kiskörút - Baross utca line, would significantly reduce air pollution in the city centre. There is one caveat – the central government has not only backtracked on its promise to provide the funds itself, but now refuses to give signature of approval to the acquisition of refundable European resources which the city administration has secured, claims the Mayor.

“We will not allow the government to run counter to the interests of the people of Budapest because of petty power-economic intentions. If we have to, we will fight for it,” Gergely Karácsony wrote on his Facebook page.

This is just the latest salvo in the tug of war between Budapest’s opposition leadership and the Orbán government regarding the allocation of funds for key development projects. Last month, after a serious of acrimonious exchanges, the government and the Budapest municipal council reached agreements on key projects, including the renovation of the iconic Chain Bridge, the upgrade of the Danube embankments, the linking of the M2 metro and the H8 HÉV lines, and the extension of Buda’s interconnected tram network.

Regarding the Chain Bridge, the government agreed to provide the promised HUF six billion (EUR 16.5m) for the bridge’s overhaul in exchange for guarantees that the bridge would not be closed for longer than 18 months. The parties, however, failed to come to terms on planned traffic changes on Grand Boulevard and the continuation of the high-profile Liget Project.

Focus on a green and liveable city

Gergely Karácsony commented on Facebook that the government was depriving opposition-run municipal councils of room for manoeuvre in order to “point a finger at them and endlessly repeat the mantra that they are incompetent.” He reminded that the new developments in Budapest would actually be paid neither by the government nor the municipal council, but the taxpayers including Budapest residents, reiterating that about 36 percent of Hungary’s GDP is generated in the capital. He ended his comments by repeating his election campaign pledge: “More green instead of concrete and a liveable city instead of prestige projects.”