Besides the wheelchair, student Teodor Todorov has also devised an eco-travel vehicle for city use 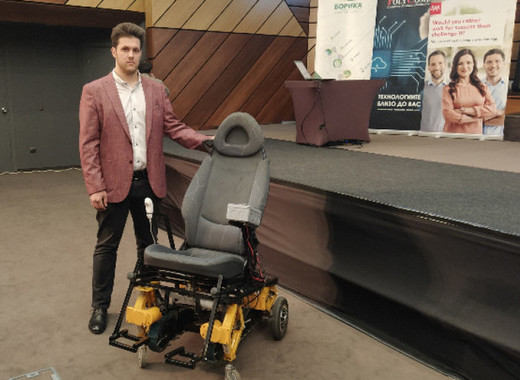 He is a high school student. And already the author of an invention that is no less effective, but far cheaper than its western counterparts - a wheelchair capable of climbing stairs. Because of it, Teodor Todorov received an award from the Bulgarian Association for Information Technology (BAIT).

"From a young age, I wanted to construct something that climbs stairs. That was the idea - to make a wheelchair to help people,” Teodor told public broadcaster BNR.

Teodor, who is a last grade student at the School of Electronic Systems in Sofia, realized his idea as a graduation project. He assembled the cart with "handy materials and a good deal of knowledge" for about three months, including its mechanical and electronic parts.

The young inventor has not yet patented the wheelchair. He wants to make a second prototype to lower the price. Further, he has the idea to develop his business venture as a startup to provide technical solutions for people with disabilities.

Despite these ambitions, Teodor does not see his project as a major money-maker. "One such product is priced between 9 and 14 thousand euros, which for a person in need is simply unthinkable. My product is currently worth 1500 leva, which is about $ 800. It's a drastic difference," Todorov notes.

Teodor's wheelchair has so far been tested by one of his classmates, who has managed to climb the stairs of the school with it. The most important test is yet to come - from a handicapped person, but Theodor has no doubt about the successful outcome.

Ecological movement in the city

Teodor Todorov plans to continue working on this project after enrolling in Mechanical Engineering at the Technical University of Sofia. He will also develop other projects, such as his eco-friendly vehicle for use in Sofia, which travels at a speed of up to 60 km per hour and has a 40 km mileage.

Teodor is convinced that studying and reading theory cannot be compared to company practice. That is why his school is affiliated with many companies and provides direct contact of his graduates with the business.