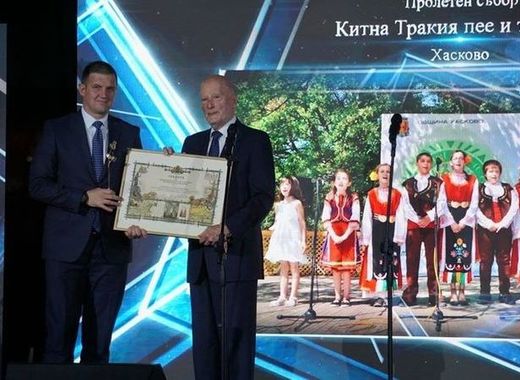 The fourth Annual Tourism Awards 2019, organized by the Bulgarian Ministry of Tourism, were presented last night at an official ceremony at the Central Military Club in Sofia.

The Minister of Tourism Nikolina Angelkova hosted the event in the company of the presenters - popular actors Yulian Vergov and Lilia Maravilla. The ceremony was honored by diplomats, ministers, MPs, mayors, journalists and representatives of the tourism industry. World-famous athletes Yordan Yovchev and Kubrat Pulev stood out among the guests.

Traditionally, the holders of the rose-shaped gold statuettes (Rose is the symbol of Bulgaria) were determined in online voting. Applicants were evaluated in 16 categories in two stages on the internet platform www.tourismawards.bg. Voting was limited to one vote per IP address, so objective results were guaranteed as much as possible.

And the winners are…

The Rupite locality in the municipality of Petrich - a mystical and ancient place linked to the life of blind prophet Vanga - was named the winner in the category "Tourist destination".

In the large “2019 Municipality” category, where the ranking is by type of tourism developed on the territory of a municipality, the winners are:

- for mountain tourism - Samokov, with great advantage over Bansko

- For cultural and historical tourism - Sliven

- For balneo and SPA tourism – Velingrad, with a convincing lead

Thracian Spring Festival of Singing and Dancing, Haskovo won in "The Spirit of Bulgaria" category.

In the "Innovation" category the ИНОСИТИ company prevailed with its tourist products Plovdiv City Card and Varna City Card.

Holding on in a difficult year

This year, the surprise was presented in the category "The Choice of the Bulgarians". Influenced probably by the massive advertising campaign, voters preferred the controversial and unfinished tourist attraction "Historical Park" near Varna's Neofit Rilski village - (15,446 votes) to the National Museum of History in Sofia, which came second with 13 793 votes.

The strong support for all candidates in the online voting precedure highlighted the hundreds of good practices in Bulgarian tourism during the year. Although 2019 was difficult and marked by major international bankruptcies, we registered over 8.3 million foreign tourist visits in the first ten months, a decrease of just 0.4% compared to the same period of the record-setting 2018, said Minister of Tourism Nikolina Angelkova.