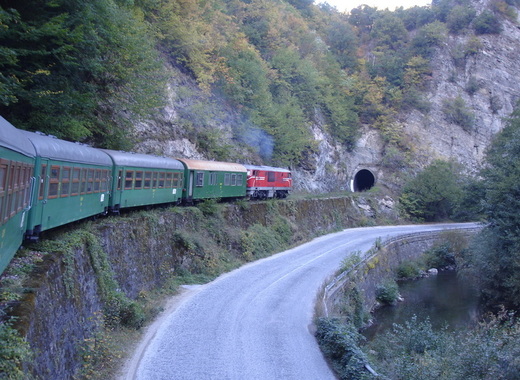 Source: Chefeca on Wikipedia (CC BY 3.0)

I remember how, in my youth, going to our family house in Velingrad, I would often skip the more convenient bus ride and pick the slow narrow-gauge train instead. This would entail getting off the fast train from Sofia at the Septemvri station, waiting for the diesel-powered train to come (sometimes for an hour or so) and embark on a painfully slow journey. But what a journey!

Starting from the Upper Thracian lowland, the austerely furnished train climbs up the Western Rhodope mountains, meandering through craggy cliffs where eagles and larks nest, disappearing in tunnels, scrambling over bridges, hanging as if by sheer magic over the abyss with the sparkling thread of Chepinska River far down below. For me, the euphoria that this journey caused was the closest thing to the notion of freedom in those dull Communist days.

But it certainly was not a solitary experience, as the slow train serving the Septemvri – Dobrinishte line, which risked being closed as unprofitable, was revived by its BDZ operator as a tourist attraction. A steam engine, made in Poland in 1949, was added to the composition of two refurbished passenger cars with compartments, a luggage van and a tank wagon.

It was worth the effort, as the narrow-gauge line, which traverses three mountains and passes through seven municipalities, was recognized as one of the most interesting railway lines in Europe by the Deutsche Bahn Guide of European Railway Timetables.

Just days ago, The Guardian included it in its list of 10 of Europe’s best rural train journeys, next to scenic routes in France, Switzerland, Portugal, Spain, Luxembourg, the Czech Republic, Ireland and Finland.

Tickets for the Septemvri – Dobrinishte ‘time machine’ can be bought only at stations, as they are not available online. Prices are BGN 6.50 (one-way) and 11.70 (return) for the entire length of the line with the option of paying just for the destination you are travelling to including transfers from Sofia, Plovdiv and Burgas.

For more information about the train and the line, follow this link.